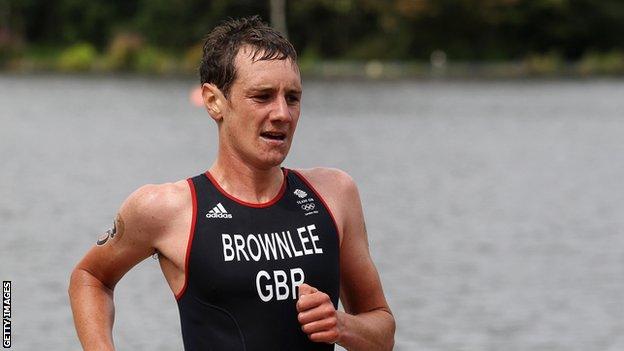 The 24-year-old missed an exit sign during the 100km cycle section causing him to lose the lead to Cesar Beilo.

Brownlee trailed the Dutchman by 80 seconds at the final transition but he cut 30 seconds off that time with a quick change into his running shoes.

He caught Beilo in the 10km run and won in three hours 20 minutes, 18 seconds.

The short triathlon - made up of a 1.5km swim, 100km bike ride and 10km run - saw Brownlee, in his second race since winning gold at London 2012, emerge from the swim on the tail of Russian Alexander Bryukhankov, who eventually finished third.

The Olympic distance features a 40km bike ride but Brownlee coped well with his first race over the step up in distance until he took a wrong turn at the Grand Prix circuit at Yas Marina.

The Yorkshireman, who has recovered from an appendix operation last year after his London triumph, made up ground in the transition zone though and reeled in Beilo within two kilometres on the run before eventually winning by more than five minutes to break the course record by 29 seconds.

"The bike was a challenge," he said. "I saw a sign on the bike course and thought that was where I needed to go. It was only when I got back on the course I realised I had been there before.

"I tried to pace it quite well. I have no idea how to pace 100km on a bike, but it seemed to go okay. I felt tired towards the end but I didn't have to push too hard, which was good as it was getting hot.

"It's a bit of a shock as it is zero degrees back home and nearly 30 here, but it was early morning so I didn't struggle too much."

Brownlee will begin his campaign to wrest the world title back off brother Jonny at the World Triathlon Series race in San Diego next month.

With many athletes competing in the longer course of a 3km swim, 200km bike and 20km run, Brownlee was up against a smaller field of athletes over half the distance.