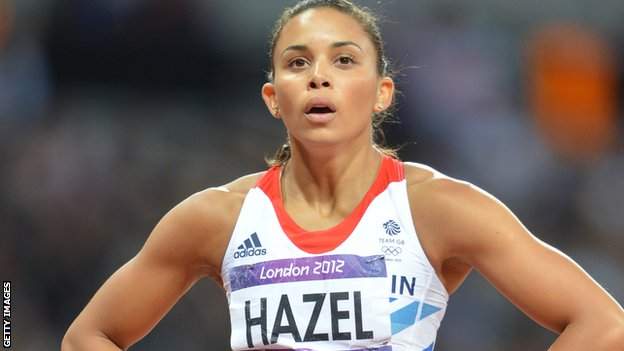 Hazel believes the targets will deny young athletes the opportunity to gain vital experience of a multi-sport event ahead of the Rio 2016 Olympic Games.

"It's ridiculous. It should be about more than medals," she told BBC Sport.

England Athletics insists it plans to take a full allocation of competitors to next year's Games.

The governing body says it will initially pick athletes who hit the A-standard and then others who attain the lower B-standard.

If there are still places available following this process then other athletes, at the discretion of the England Athletics head coach, could come into contention.

Hazel, 27, feels focusing on those with predicted medal prospects is part of a wider problem in British athletics following the decision not to select any male 1,500m athletes for the recent European Indoor Championships in Gothenburg.

"It's such a shame because we have a lot of talent and it's about giving them a chance to showcase what they have worked for - take a risk," said the Birmingham-based athlete, who finished in a disappointing 27th place at London 2012.

"If you look at the heptathlon, you need around 300 more points to hit the standards for Glasgow compared to that for Delhi.

"It is clear that the A and B standard is something new for Glasgow 2014 and shows England Athletics is moving more in line with the Olympic selection criteria. For London 2012 the number of athletes you selected at the B-standard would impact the number you could take who had attained the A-standard. But there is no such ruling for the Commonwealths.

"Athletes only really need to hit the A-standard once during the qualification period to attain nomination for Glasgow. If Hazel did not complete a heptathlon before next year's Games then, based on her 2010 win and good performances in three or four individual disciplines, she could still potentially come into contention if the head coach ruled she had a chance of challenging for a top-eight finish."

"I fear setting standards too high will potentially discourage the next generation rather than help them reach these events which they can use as stepping stones ahead of Rio."

She added: "The Commonwealths was amazing and to walk away as champion helped me gain really valuable experience which I could take into London."

In a statement, England Athletics said: "We will nominate to Commonwealth Games England the maximum possible number of athletes, prioritising those athletes most likely to contribute to our aim of the maximum number of top eight places.

"We envisage that this will be the biggest track and field team to have represented England at a Commonwealth Games."

Cambridgeshire-born Hazel, who lost her UK Sport funding after the Olympics and has considered quitting the sport, is hoping to find support outside of athletics to help her defend her Commonwealth title next year.

"It's sad because there are a lot of athletes in a similar position and it's not just a case of thinking about the Rio Olympics, we're wondering how we're going to get through 2013 first," said Hazel, who managed to secure '12 sponsors for 2012' in the build up to last summer's Games.

"I've had ups and downs in my career and I just take it on the chin and battle on.

"I'll take any opportunity that comes my way, I've qualified as a personal trainer and hopefully with a bit of sponsorship I can push on next year.

"I'll focus on the hurdles, but I'm not expecting too much from myself this season as I'm not in a position to focus on training full-time."