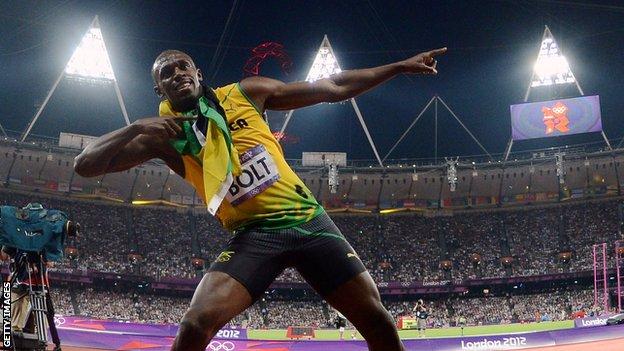 Leading athletes such as Usain Bolt will be exempt from paying income tax at July's London Anniversary Games and next year's Commonwealth Games.

London 2012 is the only time Jamaican Bolt has competed in Britain since 2009 because of the prior tax rules.

But the exemption for "non-resident athletes" in George Osborne's Budget has removed that financial constraint.

Sports Minister Hugh Robertson said: "We want to attract the very best athletes, and this helps us do that."

The change should encourage six-time Olympic gold medal winning sprinter Bolt and other high-profile sports stars to take part in the meet which will be held on 26-28 July at the Olympic Stadium to celebrate the first anniversary of the London 2012 opening ceremony.

The event contains a weekend of Diamond League athletics on 26-27 July followed by a day of Paralympic competition on 28 July.

The exemption for the London Anniversary Games was first announced by the Chancellor last month with a similar provision for the Commonwealth Games in Glasgow to be contained in the Budget.

Like most countries, the United Kingdom demands a share of any appearance or prize money earned by overseas stars when they compete here.

But unlike most countries, the UK also wants a cut of any endorsement income earned by those visitors during their stay.

Now athletes will not pay "UK income tax on all appearance fees, prize money, and endorsement income" at the two events, but they will not be exempt from corporation tax and Value Added Tax [VAT].