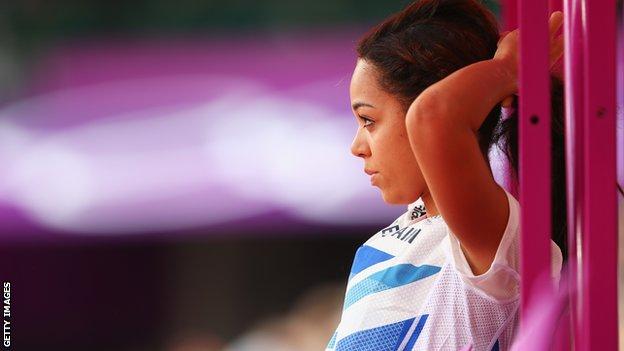 In truth, it was hardly a fair competition. One day Katarina Johnson-Thompson was among the sporting elite, buoyed by the roar of 80,000 supporters in the Olympic stadium, the next she was just one of a room full of students, slumped in her chair. Silent but for the voice of a teacher.

My coach said after the Olympics 'you do realise there's not going to be anything like that ever again?' but I don't know about that

In that context, it is a wonder the 20-year-old heptathlete, described - perhaps a little obviously but certainly justifiably - as the next Jessica Ennis, gave student life as long as 21 days before packing it in to chase gold in Brazil in 2016.

"I had such a brilliant summer and hit reality," says Johnson-Thompson of her three weeks studying for a sports science degree at Liverpool John Moores University.

"I don't want to be messing around for the next three years. I want to be in Rio, taking it seriously. I can always go back to education."

The Liverpudlian has deferred for a year but gives the impression it will be longer than 12 months before she is back in the classroom, her talk of returning to university scattered with ifs and buts.

"I'm very wholehearted. I want to concentrate on one thing in my life at one time," she says, before explaining how combining training and studying was almost impossible.

There was also the unwanted attention from fellow students, probably the only downside to finishing 15th in one of the events that made that Saturday evening at the Olympic Stadium so super.

"I moved into the halls but only stayed there for one night," says the Liverpool fan. "I had people on Twitter saying 'just seen Johnson-Thompson going into Block C' and I didn't like that.

"I applied to university and applied to stay in halls before the Olympics and then my circumstances changed."

A year to remember

Wearing a pink hoodie and stylish trainers, Johnson-Thompson could easily be mistaken for a student but at an imposing 6ft, it is obvious how the British junior record holder stood out on campus.

But, then, she has always been easy to recognise.

"I'd always stand out. I couldn't get away with anything," she laughs.

"When there was a fight in school, because I was the tall one the teachers would say, 'I know you were there, I could see you'." She points her finger, mimicking a schoolteacher.

It is this laid-back manner that might also explain why Johnson-Thompson made such an impression over the summer.

The sight of the young heptathlete coyly waving at the camera before breaking into a fit of giggles as she stood on the start line for the 100m hurdles, the first event at her first Olympics, was one of the most endearing moments of the Games.

"I don't know how anybody could keep a straight face when the crowd were going wild," says the athlete described by Olympic champion Jessica Ennis as a scary prospect.

"I was in lane nine, the last to be introduced, and the crowd went mad - they just went on and on.

"I think I'll be like that all the time. I don't know, if I were to be in Jess's position, whether I'd be able to blank it all out.

"Maybe I'm the kind of athlete who absorbs the atmosphere instead of trying to block it out.

"It was very addictive. Once we finished the hurdles and high jump we had a break, but I just wanted to carry on."

During the two days Johnson-Thompson spent running, throwing and jumping in front of a packed Olympic Stadium, she gradually began to realise that competing alongside Ennis, the poster girl of the Games, had affected her life.

"I didn't go on Twitter for three days before the event and I remember I had 1,500 followers," says the world junior long jump champion.

"With so much focus on Jess, everyone was watching the coverage and when I checked on the Saturday morning I had 30,000 followers.

She guffaws before showing me the picture on her phone and, indeed, somewhere on this planet there is an arm with the letters KJT inked just above a Batman logo.

Johnson-Thompson on being the new Jessica Ennis:

"As soon as Jess started saying things like 'I'm going to have to retire' that's when people started getting interested in me. I'm sure when she was coming up she got compared to Denise Lewis. If it weren't for Denise and Jess, I wouldn't have seen the pathway to get there. She's her own athlete and I'm my own athlete."

The laughter stops abruptly, though, when the conversation turns to the shot put.

"I got a personal best in the hurdles and high jump [at London 2012], and I was third after two events. Then came the shot put. And I was 22nd. That was a big wake-up call.

"I'm always trying to work out my possible scores on my app. I'm happy and then I realise 'oh, there's the shot'. The shot always brings me down.

"I watch the shot putters and think 'I'd give anything to throw that far'."

But she is laughing again as she recalls an encounter on the subject with a teenager at her athletics club.

"When I came back from the Olympics there was this lad, who is a shot putter at our club. He said to me, 'Kat! Kat! Well done at the Olympics, but the shot put... we've got to talk'."

However, it is coach Mike Holmes to whom Johnson-Thompson turns for advice. His presence at Liverpool Harriers is the reason she is happy to continue training in rickety facilities, without even enough space for a full run-up to the high jump.

"If I have the facilities but a lesser coach there's no point," she says.

And it was on her coach's orders that Johnson-Thompson took two months off after the Olympics to recover from an ankle injury, spending time "enjoying life a bit".

But it has since been a winter of hard work - lifting weights, tinkering with her diet, working on technique, all in a bid to improve on the career-best 6,267 points total she accumulated at the Olympic Stadium.

"This winter has been about the throws," she says, returning to her struggles with that third discipline. "I suppose the shot put is a good event to be bad at because you can gain strength with age and you can work on your technique.

"Hopefully, If I keep everything the same and increase my throws, my average heptathlon score is just going to go up.

"You only have to look at how she coped on the big stage at London 2012 to see that she's someone who is going to be around for a long time to come. And that's quite scary, that she's going up and up and I'll be going down. So we might meet in the middle but I think I'd have to move into another event or retire before that happened."

"I've been working on the shot put three times a week.

"We split the week up into weights, fitness and technique. We've been doing the same amount of weights as last year but more upper body weights."

In May, Johnson-Thompson will find out how much she has improved when she competes at a heptathlon meeting in the Austrian town of Gotzis.

"My coach said after the Olympics 'you do realise there's not going to be anything like that ever again?'" she says.

"But I don't know about that. I know the noise might not be the same but my experience might be. I want to be able to get that medal. At Rio I'll be 23 and at the next Olympics I'll be 27, which is Jess's age."

It will probably be some time before students can start boasting once again of catching sight of Johnson-Thompson heading towards a lecture theatre.