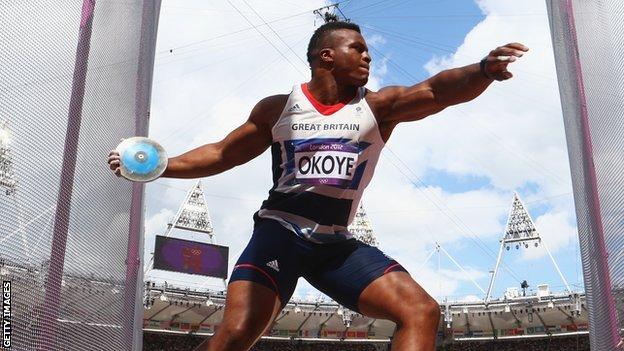 Britain's top discus thrower Lawrence Okoye is set to embark on a career in American football after attracting the interest of some leading NFL teams.

The 21-year-old, who stands at 6ft 6in and weighs 21st, finished 12th in the Olympic discus final in London last summer.

A former junior rugby union player, Okoye only took up discus in 2010.

"Just wanted to confirm that I have decided that I want to play American Football in the NFL," he tweeted.

Okoye attended a recent trial in Atlanta, Georgia during a break from warm-weather discus training, and has a second trial next weekend in Dallas.

If the expected move to the NFL goes ahead, he will miss the 2013 athletics season, including the World Championships in Moscow in August.

'From my mid-teenage years, everyone kept telling me to give American football a go, and I thought about applying for an American college scholarship when I was 16," he told the Mail on Sunday.

"I've always been a huge NFL fan for as long as I can remember and whenever I've arrived in the States the customs officers always ask me who I play for. I want to give this my best shot. It's a rare life opportunity."

Okoye also said that the clubs who are keen to secure his services see him as a defensive end where his size and strength would be an advantage, but with the college drafts not taking place until the end of April, he will not be signing any professional deal until then.

However, he still has ambitions to continue his discus career, which saw him win gold at the 2011 European Under-23 Championships.

"I do not intend to quit athletics completely," he said. "The best age to be a discus thrower is your late twenties to around the 30-mark. In the Olympic final, that was the average age, even though I was 20.

"I fully intend to return to throwing the discus when my hopeful football career ends, which could well be around the same time."