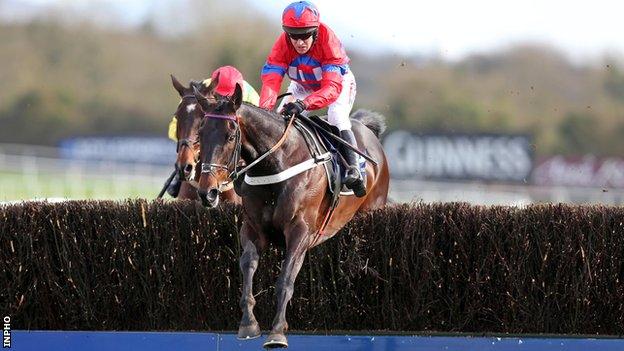 Sprinter Sacre completed a festival hat-trick by holding off a brave challenge from Sizing Europe in the Champion Chase on the opening day of the Punchestown meeting in Ireland.

The Nicky Henderson-trained gelding's win added to his victories at the Cheltenham and Aintree festivals.

Sprinter Sacre's winning margin of just over five lengths was reduced from the 19 lengths in the Queen Mother Chase.

But it was still a comfortable win for the 1/9 odds-on favourite.

The seven-year old, who won the Queen Mother Champion Chase at the Cheltenham Festival before landing Aintree's Melling Chase, was clinching a 10th consecutive win over fences.

Sprinter Sacre has been described by jockey Barry Geraghty as jump racing's Pele as he performs with apparent effortless ease.

Sizing Europe, the distant runner-up in Cheltenham's Champion Chase, made a brave bid by taking out the pace before being overhauled at the final fence.

"He was at his best at Cheltenham, he wasn't quite as sharp at Aintree and wasn't as sharp today," added the trainer.

"To do all three (Cheltenham, Aintree and Punchestown) is very, very hard and he's had to work harder today than he has in the past.

"He didn't do anything wrong. He was clean and confident and fair play to Sizing Europe, who ran a hell of a race."

The two-mile feature race was the highlight on the first day of a meeting that will attract a total of about 100,000 racegoers.

Champagne Fever had won the Supreme Novices' Hurdle at Chelthenham, when Jezki only managed third.

In Tuesday's other Grade One race, Mount Benbulben finally lived up to his tall reputation with a defining victory over fences in the Champion Novice Chase under Danny Mullins.

The Gordon Elliott-trained 14-1 shot has had jumping issues in the past, but was far more assured on this occasion, beating Tofino Bay by 22 lengths.

National Hunt chase winner Back In Focus was well beaten, while his stable companion Boston Bob was similarly held when suffering a heavy fall.

Davy Russell, who suffered a punctured lung and was replaced in Cheltenham's blue riband contest by AP McCoy, will be back on board Gold Cup runner-up Sir Des Champs in Wednesday's big race, the Punchestown Gold Cup.

Mouse Morris's First Lieutenant could also be a contender in Wednesday's big race after taking victory in the Betfred Bowl at the Aintree Festival.

Eleven Cheltenham Festival winners are expected to run during the course of the week in what is considered to be the strongest Punchestown line-up for many years.