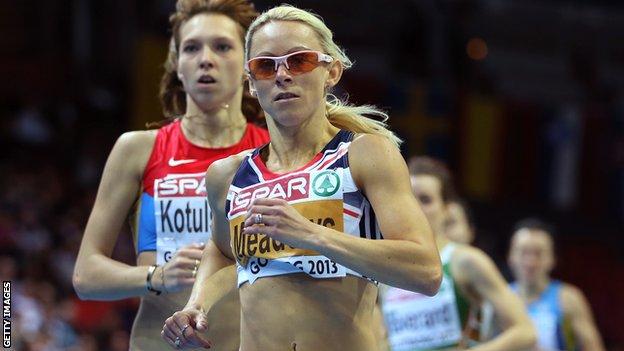 Jenny Meadows will miss the World Championships after being ruled out for the rest of the season with a stress fracture in her thigh bone.

It is a further setback for the 800m runner, who in the wake of an Achilles injury.

"It feels especially cruel on the back of the heartache of missing last year's Olympics and then getting myself back to such great shape," said Meadows, 32.

"At least I have a bit more time to get my head around it this season."

Meadows, from Wigan, was controversially left out of the Great Britain team for London because of concerns over her fitness, having

The 2009 world bronze medallist returned to competition earlier this year,

She continued: "This has obviously come as a shock as I had a full season of races planned, and coming off the indoor season we were just so positive.

"Training was going so well, and my times were indicating I could compete for a medal in Moscow and set a career-best time this season."