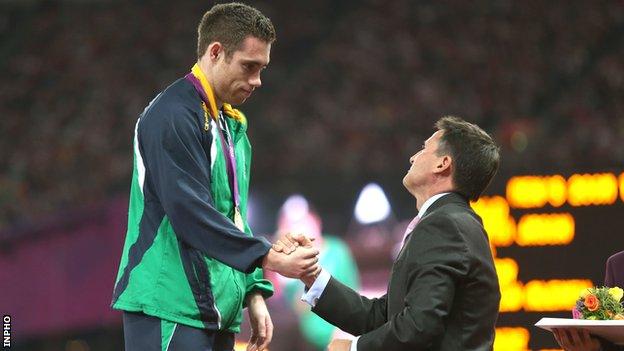 Lord Coe and Paralympics star Jason Smyth will be among the big names at the Belfast athletics meeting later this month which will officially re-open the refurbished Mary Peters Track.

Dame Mary Peters will be hosting the 25 June event in conjunction with Belfast City Council which will see the tape being cut on the £3m venue upgrade.

A specially commissioned bronze stature of Dame Mary will also be unveiled.

Sprinter Smyth will be in action and further top athletes will also compete.

Dame Mary said she was delighted that the track named in her honour would continue to serve Belfast and Northern Ireland.

"I congratulate and thank the Belfast City Council for their investment which I am sure will contribute to the future sporting success of athletes from Belfast and Northern Ireland," she said.

"I am delighted that Belfast has a truly world-class facility that will serve both current and future generations of young athletes for many years to come."

Belfast Lord Mayor Máirtín Ó Muilleoir said that the event would be "fantastic for everyone involved".

"The facilities are world class standard, but are also being used by school children and local athletes still striving to reach international level," added the Lord Mayor.

Athletics Northern Ireland secretary John Allen said that the governing body was "delighted" to have the venue re-opened after the refurbishment work.

"The upgraded facility will provide a foundation on which the sport of athletics can build upon in the future," added Mr Allen.