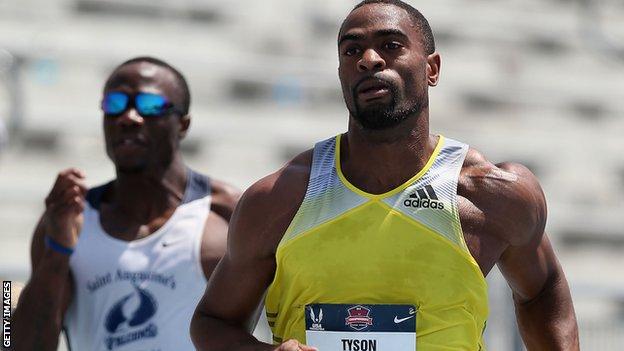 The 30-year-old American is the star attraction in the 100m and is hoping to break his career-best 9.69 seconds, set in 2009, as he prepares for August's World Championships in Moscow.

"I haven't set a PB for four years. I'm hoping to do that this year," he said.

Britain's Christine Ohuruogu will run in the women's 400m in Lausanne.

Olympic champion Bolt, 26, will run in the 200m in Paris on Saturday instead but Gay is looking forward to facing the Jamaican over both distances at the World Championships.

"We all know Usain performs well at major championships. I'm just hoping I'm at my best and I give it my all, whatever the outcome may be," Gay said.

"It's been a long time since I doubled at a major championships, so it's good to be able to do that again."

Australia's London 2012 gold medallist Sally Pearson will be looking for revenge over Dawn Harper-Nelson in Lausanne after the American beat her in Sunday's 100m hurdles.

However, Dai Greene has pulled out of the 400m hurdles after undergoing a blood test for a minor virus.