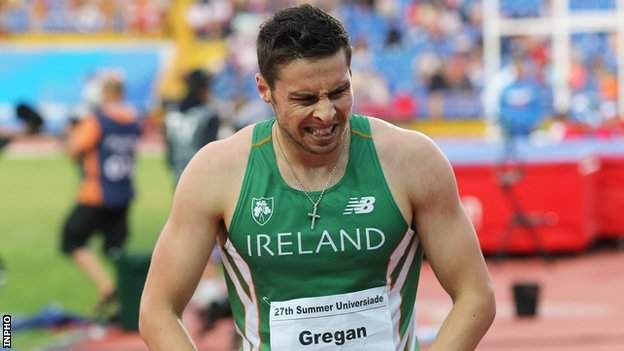 Brian Gregan suffered disappointment as he could only manage fifth in the 400m final at the World University Games.

Gregan, who has a personal best of 45.53, was the fastest qualifier after clocking 45.91 in the semi-finals.

He clocked 45.83 in the final but that left him behind Russian winner Vladimir Krasnov who won in 45.49 in Kazan.

Gregan finished fifth at the last World University Games and he is certain to be disappointed by his repeat performance in Russia.

Silver medallist Henriques went out hard in Tuesday's race and held a big lead at the halfway point.

However, Krasnov produced a strong closing 50 metres to take the gold as Gregan missed out on a medal in a blanket finish.

Meanwhile, Amy Foster opted not to take part in the 200m heats on Tuesday after her impressive fifth place in Monday's 100m final.

"Decided with my coach (David Reid) not to run the 200," said Foster on Twitter.

"Want to recover, get fresh legs and run fast in the next two weeks to hopefully squeeze out a (World Championship) B standard.

"Happy with my performance in the 100m final. Would have loved a faster time but running in puddles doesn't make for fast times."

While Foster opted out of the 200m, Niamh Whelan did come safely through the opening heats in the event after clocking 24.15 seconds to secure an automatic qualification.

Also on Tuesday, Jessie Barr finished fifth in the women's 400m hurdles semi-final after clocking a time of 57.65.