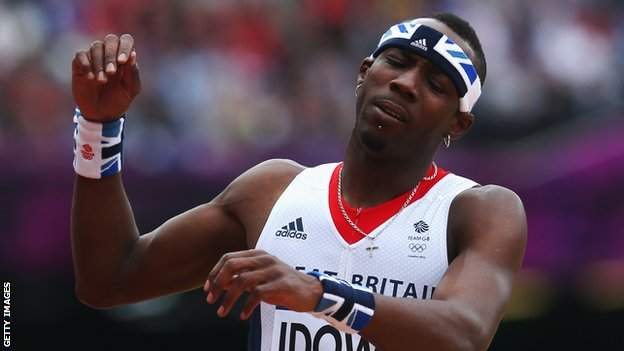 British triple jumper Phillips Idowu will miss next month's World Championships after deciding to take a break from the sport.

Idowu, 34, was favourite for gold but failed to make the final and has competed just once since.

"After some careful consideration I have decided that for the foreseeable future I will be taking a step back from athletics," he said.

"I feel this is the right time for me to make this decision."

He finished seventh in the Diamond League meeting in Rome last month - his only competition since London 2012 - as he continued to struggle with injury and form.

The Brit, who had a slight heel injury, was omitted from the European Team Championships in Gateshead in late June, with Nathan Douglas being favoured instead.

He has dropped to outside the top 50 in the world this year, and is third overall in Britain behind Douglas and Julian Reid.

Despite his omission from Gateshead, Idowu was still expected to compete at this weekend's World Championship trials in Birmingham, however he has now changed his plans.

Idowu added: "I greatly appreciate all of the support I have received over the past years, particularly from the British public and my team and sponsors.

"It has been an extremely happy and successful time. I'm excited about pursuing other interests and taking other opportunities that present themselves to me during this break."

The World Championships will be held in Moscow, Russia, from 10-18 August.