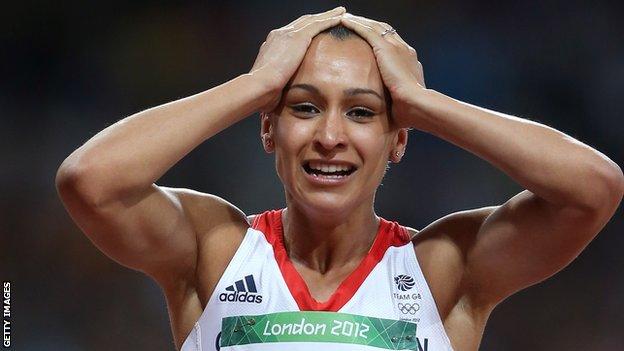 Jessica Ennis-Hill has withdrawn from this weekend's British Championships in Birmingham as she continues to struggle with an ankle injury.

The 27-year-old, who won heptathlon gold at the Olympics in London last year, has yet to compete this season.

This latest withdrawal will increase fears over her fitness for the World Athletics Championships, which take place in Moscow from 10-18 August.

However, her coach Toni Minichiello remains optimistic she will be fit.

Ennis-Hill later tweeted: "Frustrating times! But I've not given up yet! #partofbeinganathlete."

Ennis-Hill had been expected to begin her season at the Women's Athletics Meeting in Edinburgh on 8 June but withdrew from that and the Diamond League 100m hurdles event in Oslo less than a week later with an ankle injury, originally reported as an Achilles tendon problem.

The same injury kept her out of the European Cup Combined Events Super League meeting in Estonia at the end of June.

The Briton, who married long-term partner Andy Hill in May, opted to miss the 2013 indoor season to concentrate on winning gold at the World Championships in Russia.

This weekend's championships double as trials for the Worlds, but Ennis-Hill already has the 'A' qualifying standard so will be available for selection if fit.