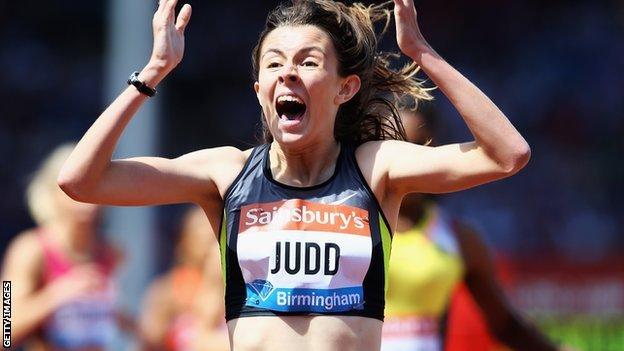 Judd, 18, met Radcliffe after winning on her international debut at the European Team Championships in Gateshead last month.

She then broke the two-minute barrier for the first time at the Diamond League meeting in Birmingham.

Her time of 1:59.85 met the World Championships qualifying time.

I was worried it might be just a fluke or a one-off performance, but she helped me to focus and get back to training and run under two minutes at Birmingham

Judd made it six wins out of six this summer when she qualified for the final of the 800m British Championships and World Trials on Saturday after cruising through her heat in a time of 2:04.01.

She said: "Paula Radcliffe is my idol. Everything she achieved was just amazing.

"She had some disappointments in her career, but to bounce back was inspirational to me. I would love to emulate her career.

"She was lovely after Gateshead and sat in the stand with me. We talked and later exchanged texts. I appreciated all her fine words. It really helped with my confidence.

"I was worried it might be just a fluke or a one-off performance, but she helped me to focus and get back to training and run under two minutes at Birmingham."

Judd's Twitter profile includes the quote: "Don't let anyone put limitations on your dreams, defy gravity because that way you can touch the stars." She insists that is her philosophy in life.

The Chelmsford-based runner, who teamed up with coach Rob Denmark in early 2012, added: "A lot of people go on about age and that I'm only 18, but if I can run fast now I can race against senior athletes no matter my age.

"I didn't want to put any limitations on this season at all. Training is going well and Rod has helped me with that. I knew it was possible to go under two minutes and now I'm trying to cement my place in the team for Moscow.

"Before this season I wanted to run for my country at senior level, so the European Team Championships was amazing. One of my aims has now been ticked off. Now my aim is to go to the World Championships and wear the Team GB vest.

"The Olympics in Rio is a few years down the line and if the success can continue hopefully I will be there."