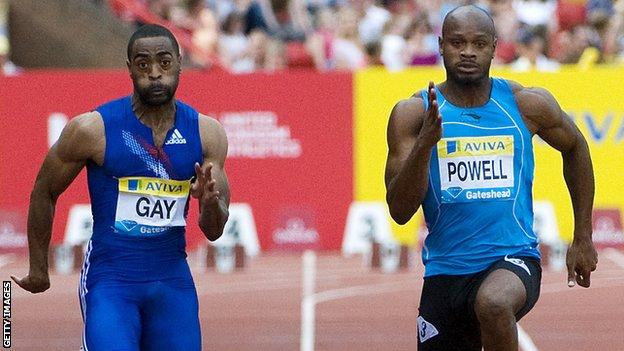 American Gay, 30, the joint-second fastest man ever over 100m, was told by the US Anti-Doping Agency on Friday that his A sample from an out-of-competition test in May was positive.

Women's discus thrower Allison Randall on Monday confirmed a positive drugs test from the Jamaican trials, the same day police in Italy raided the hotel rooms of Powell and Simpson and took away unspecified drugs for analysis.

The 30-year-old Powell was the last man to hold the individual 100m record before compatriot Usain Bolt broke it in 2008.

"These are all big names. To take Asafa Powell and Tyson Gay out leaves a big void in our sport.

"We have to sift out the negative people and we will never be in a win-win situation. When you expose these people it can have an adverse effect but it is important to do so, for the future of the sport and the next generation."

He has run 9.88 seconds this year for the 100m, but failed to make the Jamaican team for next month's World Championships.

"I want to be clear in saying to my family, friends and, most of all, my fans worldwide that I have never knowingly or wilfully taken any supplements or substances that break any rules," Powell said in a statement.

He has already withdrawn from next month's World Championships in Moscow.

"I don't have a sabotage story... I basically put my trust in someone and was let down," he said.

"I know exactly what went on, but I can't discuss it right now.

"I hope I am able to run again, but I will take whatever punishment I get like a man."

Usada responded to Gay's disclosure by releasing a statement that read: "In response to Mr Gay's statements, Usada appreciates his approach to handling this situation and his choice to voluntarily remove himself from competition while the full facts surrounding his test are evaluated.

"The B sample will be processed shortly, and as in all cases all athletes are innocent unless or until proven otherwise through the established legal process, and any attempt to sensationalise or speculate is a disservice to due process, fair play, and to those who love clean sport."

Gay, who missed almost a year of running after he had hip surgery in 2011, had been in impressive form so far this year, clocking the three fastest times of 2013.

He won the 100m at the Jamaica Invitational athletics meeting in May with a time of 9.86 seconds, before clocking 9.75 seconds - the fastest time of 2013 - to win the US World Championships trials the following month.

He continued his good form with victory in the men's 100m at the Diamond League meeting in Lausanne, running 9.79 seconds.

While the results of B tests are awaited, some leading former athletes have called for tougher action on those found to have breached doping rules.

"When are we going to get the life ban? Who does it need to be before you go 'OK, enough's enough'? It's ridiculous," said Darren Campbell, who won Olympic relay gold with Great Britain at Athens in 2004.

Jonathan Edwards, who won triple jump Olympic gold in Sydney in 2000, said on Twitter: "Tyson and Asafa were always two of the good guys in my eyes, in all respects - very sad day."