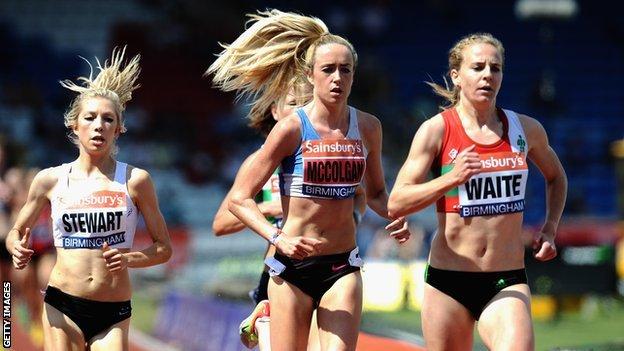 Eilish McColgan led a Scots trio in the women's 3000m steeplechase final at the British Championships in Birmingham.

There was a Scots one-two in the women's 5000m, as Steph Twell beat Laura Whittle to first place.

And Elidh Child's silver medal in the 400m hurdles contributed to a Scots medal tally of 14 at the event.

Twell's winning time was 15 minutes 55.01secs, with Whittle half a second over the 16-minute mark.

Shakes-Drayton's time of 54.36 seconds was a British Championship record but Pitreavie's Child made ground on her friend and rival in the closing stages to record a time of 54.9 secs.

Central Athletic Club's Morag MacLarty boosted her case for a place in Scotland's 2014 Commonwealth Games team with a fourth-place finish in the women's 1500m final, which was won by Oxford's Hannah England in 4 minutes 10.99 seconds.

Edinburgh's Susan McKelvie picked up a bronze medal in the hammer throw with a distance of 60.92m.

With six medals from Scottish athletes on Saturday, McColgan's and Twell's golds, the silvers for Child, Whittle and Stewart, and the bronze medals won by Waite, McKelvie and Smith made it 14 medals for the country across the weekend.