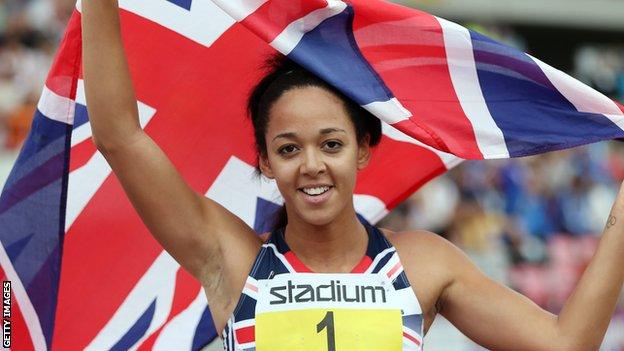 Great Britain's Katarina Johnson-Thompson won gold at the European Under-23 Championships in Finland.

The heptathlete finished with 6,215 points, 269 ahead of second-placed Kira Biesenbach of Germany.

World junior long jump champion Johnson-Thompson, 20, took a 170-point lead after jumping 13cm further than the rest of the field.

I'm delighted with how the championships have gone. The team has been very professional and we've won 15 medals with only 36 members of the team

She increased her lead to 195 points going into the final event of the competition, the 800m, where she finished second to claim gold.

"It means a lot to me to win gold here considering I got injured in May. I didn't think I'd make it back to this standard this season," she said.

"I haven't had a chance to see where my fitness is at, so coming into this competition I was very nervous because I didn't know what shape I was in. It's a huge relief and I can look forward to [the World Championships in] Moscow. That's a current World Championship A standard, so I'm really happy with that."

Adam Gemili, fresh from winning the 100m on Friday, helped the 100m relay squad to gold, anchoring the team of Deji Tobais, Danny Talbot and Dannish Walker-Khan to a European under-23 record time of 38.77 seconds.

"It was so much fun," said Gemili. "It's such a great way to finish. It's been an up and down championships for me and to be going home with another gold medal and a European record, I couldn't ask for more than that."

The women's team of Annie Tagoe, Corinne Humphreys, Rachel Johncock and Jodie Williams took silver in their 4x100m relay, just pipped to the gold by Germany.

The silver was a third medal of the games for Williams, the most by a British woman since Allison Curbishley, who won two in 1997.

"The team came together really last minute so I'm really proud of everyone. To come out here and get a medal is just insane."

Smith jumped a personal best of 2.26m to win bronze in the men's high jump, two centimetres short of the winning height of 2.28m.