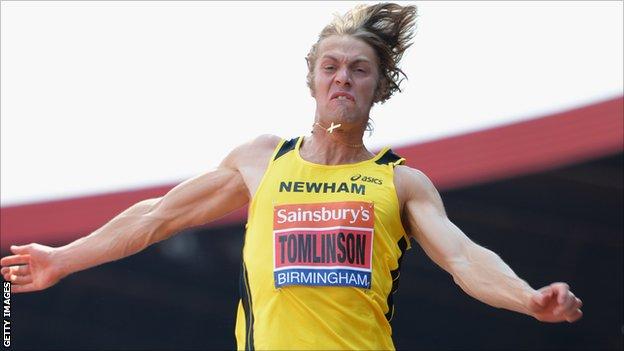 Middlesbrough long jumper Chris Tomlinson believes a headwind may have cost him a place in Great Britain's squad for the World Championships.

The 31-year-old has already achieved the B standard qualifying distance with a leap of 8.21 metres last month.

But he is in competition with Olympic champion Greg Rutherford for the one B standard place available and could only manage 8.03 in Birmingham on Saturday.

"In world terms, the conditions made it a tough jump," Tomlinson told BBC Tees.

"As soon as we walked out I asked the officials if we could change it round. However, they said as the TV cameras were all set up, we had to get on with it."

His jump was good enough to win the competition, but he needed to go beyond Rutherford's best this season of 8.22, set in Eugene in the United States in May.

And now Tomlinson is fearing the worst, with the selection team expected to announce the Team GB squad on Tuesday for the World Championships, which will take place in Moscow from 10-18 August.

"The selectors are a decent bunch and they have some hard decisions to make," Tomlinson added.

"You just get on with life, it's all just part and parcel of it."

Tomlinson finished sixth in last year's London Olympics final with a jump of 8.07, while Rutherford took the gold with 8.31.