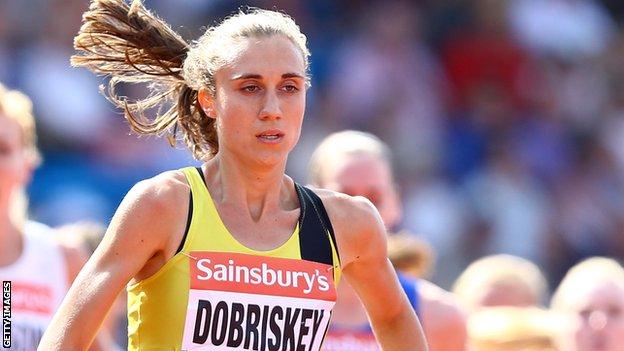 British 1500m runner Lisa Dobriskey has withdrawn from next month's World Championships with a leg injury.

The 29-year-old, who won silver in the 2009 World Championships in Berlin, says her season is over after suffering the problem in the British trials.

"Sadly, the scan picked up a grade three tear so I have no choice but to end my season here," she said on social-network site Twitter.

The British team for the Championships was announced on Tuesday.

Dobriskey was hoping to put an injury-hit 2012 behind her as she sought to repeat the form that saw her win world silver four years ago, at next month's competition in Moscow.

But after pulling up during Sunday's British Championships 1500m final in Birmingham, a scan revealed the injury has ended her hopes of competing.

"It is incredibly unfortunate circumstances," UK Athletics performance director Neil Black said on Sunday. "I think Lisa was spiked and there was a collision."

At the London Olympics, the Kent athlete impressed en route to the 1500m final, but finished a distant 10th as Turkey's Asli Cakir Alptekin won gold.

Dobriskey had suffered a troubled build-up to the Games, first sustaining a hip injury before being diagnosed with blood clots on her lungs.