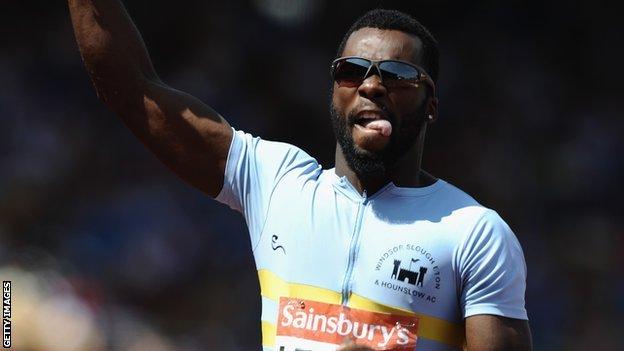 British sprinter Nigel Levine has said he will use his first World Championships as a "stepping stone" to becoming a world class 400m runner.

The 24-year-old has been after winning the UK Championships at the weekend.

And the Bedford athlete told BBC Three Counties Radio he can beat the best in the world "in time".

"I can do it. But I'm going to be very realistic - it's not going to happen this year," he said.

"But hopefully I can give the number one guys a very good race. I've got nothing to lose."

He won silver at this year's European Indoor Championships and went on to win the UK Championships in 45.23 seconds, 0.05 seconds under the 'A' standard required to qualify for Moscow next month.

"The Olympics last year was quite good but I wasn't satisfied with it," said Levine, who is the 20th quickest man in the world this year over 400m.

"I was like 'Well let's try and make the World Championships and make the final and then work to the Olympics in 2016'.

"It's about stepping stones and trying to get the experience of being a word class athlete and being under pressure.

"I'm excited it's actually happening and the sacrifices are paying off."