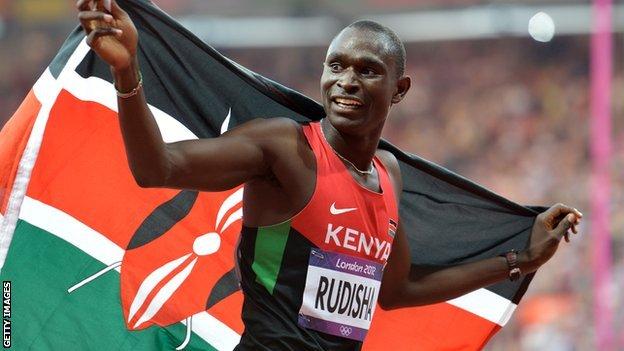 Olympic champion David Rudisha has pulled out of the 800 metres at next month's World Championships in Moscow with a knee injury.

The Kenyan, 24, first felt pain in his right knee at the Adidas Grand Prix in New York in May.

He produced one of the best performances at London 2012 to claim gold in a world record time.

His absence follows the withdrawal of sprinter Tyson Gay from Moscow after failing a drugs test.

Rudisha's coach, Colm O'Connell, revealed the injury may have occurred several weeks before New York when Rudisha was running on rough ground in Kenya.

He had been receiving specialist treatment in Germany.

O'Connell said: "Doctors in Germany said it may take three weeks for him to recover and we thought he would have seven weeks of training.

"We held back hoping for improvement, and he has improved quite a lot, but we didn't want to do a crash course between now and the World Championships, which may aggravate the injury."