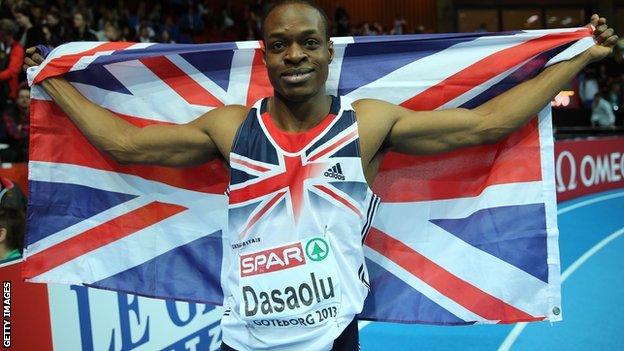 Dasaolu, 25, produced a stunning run at the British Championships on Saturday, clocking 9.91 seconds to become the second-fastest Briton of all time.

He is now a medal contender for next month's World Championships in Moscow.

Black told BBC Radio 5 live: "It's impossible to say what his potential is and we think there is more to come."

And he added: "I'll leave it to him to demonstrate what his potential is through his performances over time."

Dasaolu's time has only been bettered by former world and Olympic champion Linford Christie's 9.87 seconds - in 1993.

His fourth personal best this year before a stunned crowd at Birmingham's Alexander Stadium on Friday was three-hundredths of a second faster than Jamaica's six-time Olympic champion Usain Bolt has managed this year.

Black added: "It was a slight surprise that he ran that fast in Birmingham, but it wasn't as much as a surprise to us.

"The focus has always been on the World Championships. We believe he is competitive to reach the final. Then who knows after that.

"We haven't really been able to demonstrate of late those guys who are capable of running consistently sub-10 seconds and then following that pathway to performances we only dream of.

"James is clearly one of those people who we are now looking for consistently sub-10 second performances as the platform to run even faster.

"Most people who know him say he looks like he is one of those who really could run fast. He's in great hands, there's no rush and we are quietly optimistic."

Dasaolu will be joined by Dwain Chambers, 35, and Harry Aikines-Aryeetey, 24, in contesting the 100m in Russia.

Adam Gemili won 100m gold at the European Under-23 Championships but has instead been selected for the 200m and 4x100m relay.