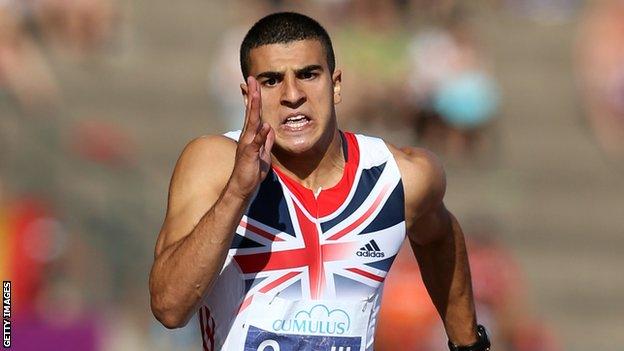 Adam Gemili says being selected for the 200m at the World Championships will benefit his career in the long term.

The 19-year-old won the 100m at the European Athletics Under-23 Championships in Finland this month.

However, Gemili has not reached the 100m 'A' qualifying standard of 10.15 seconds this season.

Gemili ran a time of 10.05 to win gold at World Junior Championships last year and went on to finish third in his semi-final at the London Olympics.

The Blackheath and Bromley Harriers athlete, who switched from football to athletics full-time in January 2012, helped Great Britain to gold in the 4x100m relay at the European Athletics Under-23 Championships and has been selected for that discipline at the World Championships next month.

But Gemili, whose best legal time in the 100m this year is 10.18, missed out on selection for the 100m in Moscow, with James Dasaolu picked alongside Dwain Chambers and Harry Aikines-Aryeetey.

Dasaolu ran 9.91 seconds at the British Championships last weekend to become the second-fastest Briton in history.

"He has always been capable of that time and had that within him.

"He has struggled with injury for a couple of years and the fact he is now back, fit and healthy is great for British sprinting.

"In terms of Europe, we haven't always had the best sprinters. It's pretty much been Christophe Lemaitre and Churandy Martina that have really been there.

"There are a lot more sprinters coming through, with Jimmy Vicaut from France and James while Dwain Chambers is still there.

"It is great we are able to go out there and match the Americans, Jamaicans and the rest of the world.

"I think the team we have got for the relay, if we get it round successfully, could definitely be in contention for a medal."