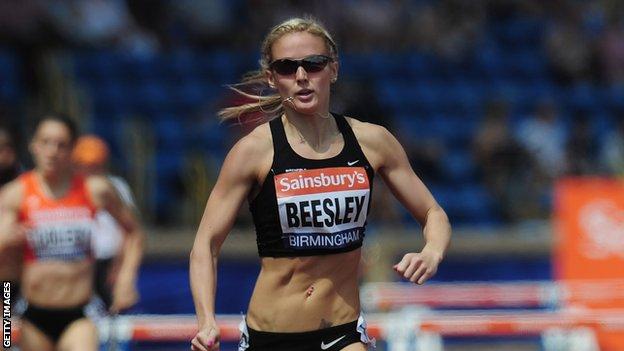 Meghan Beesley said she almost quit athletics to become a teacher after missing out on a 2012 Olympics place.

The 400m hurdler has, however, had an upturn in form, and has been selected for the World Championships in Moscow.

"After last year it was so hard to pick myself up, I didn't get selected for the Olympics and didn't run well," she told BBC Coventry & Warwickshire.

"I almost considered quitting athletics and doing a PGCE for teaching. That's how bad it was last year."

The Warwickshire athlete achieved the A standard qualifying time for Moscow with a personal best in Geneva of 55.28 seconds.

And after coming third at the British trials, she was selected for the team travelling to Russia alongside fellow 400m hurdlers Eilidh Child and Perri Shakes-Drayton.

Beesley, though, admits that she did have to consider her options on whether she would continue to pursue athletics following last year's European Championships in Helsinki, where she finished eighth in her semi-final.

"I got back from the Europeans and just went on holiday and when you're there you can reflect on what's going on.

"I just decided to commit to athletics this year, and now it's paid off."