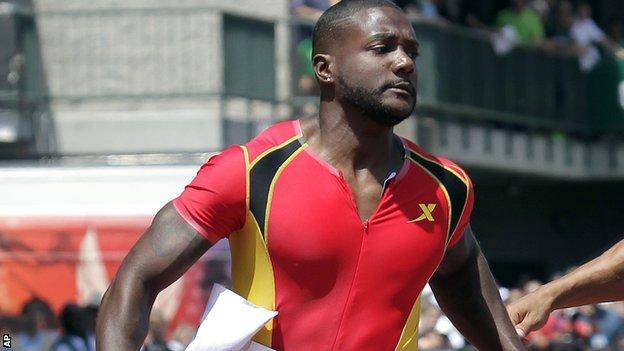 The 2004 Olympic gold medallist served a four-year ban from 2006 after testing positive for a banned substance.

"This is something that has not happened for the first time - it's something we have to deal with."

"There are cheaters and we will do our best to catch them."

Gatlin has faced intense criticism since his positive test for testosterone and does not expect the attention to be diverted away from him.

"I'm not sure it takes any heat off me. It's still a normal day when I wake up and when I go to sleep," he added.

Lamine Diack, president of the International Association of Athletics Federations, vowed to continue the fight against doping.

"We are doing, every year, thousands and thousands of controls in and out of competition," he said. "There are cheaters and we will do our best to catch them."

Gatlin's countryman Gay, 30, the joint-second fastest man ever over 100m, was told by the US Anti-Doping Agency last week that his A sample from an out-of-competition test in May was positive.