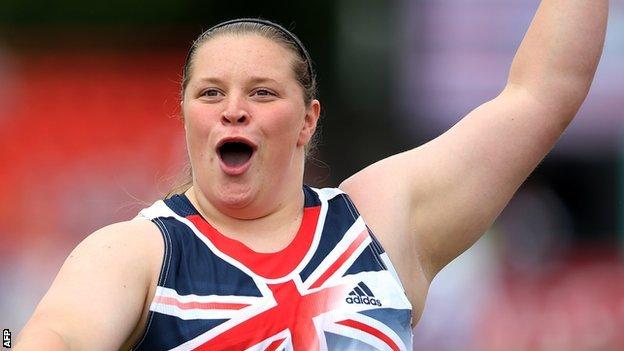 Britain's Sophie McKinna has said she was disappointed not to take shot put gold at the European Junior Athletics Championships in Italy.

The 18-year-old won silver to become the first British woman to win a shot put medal at the competition.

"I am slightly disappointed because you train to win the gold. But overall I'm pleased with the performances."

McKinna, who was the first British woman to win a global shot put medal when she took silver at the 2011 World Youth Championships, registered 17.09m, her second-best throw of the year, to finish behind Turkey's Emel Dereli, who landed a distance of 18.04m.

None of McKinna's five successful final throws dropped below 16.31m, an effort that would have secured fourth by itself.

"It was the most consistent series of throws I've ever put together in my life, with two throws over 17m," she said. "Overall it's mixed feelings really."

The British under-23 champion will take part in this weekend's Anniversary Games at the Olympic Stadium and will work with her coach Geoff Capes, the former European and Commonwealth champion, on making big throws with more regularity.

"I'm not one of the most consistent throwers throughout a competition, so for me it was an achievement to put a series like that together," she said.

"I'll speak to Geoff and I think that will be one of the things he'll be most pleased about."