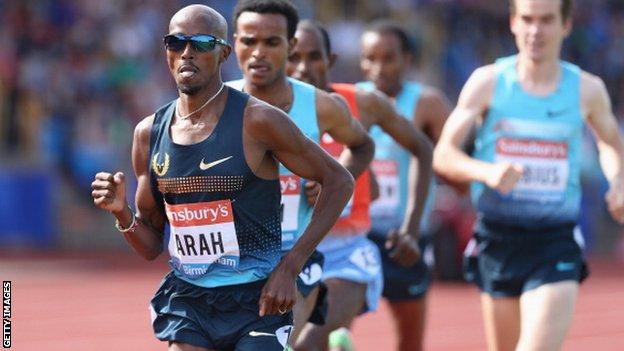 Olympic champions Usain Bolt, Mo Farah and Jessica Ennis-Hill return to the Olympic Stadium a year after their unforgettable gold medal-winning performances during London 2012. In his latest column, Steve Cram talks about "phenomenal" Farah after the Briton broke his long-standing 1500m record, Ennis-Hill's injury worries and the worldwide impact of last year's Olympics on athletics.

What Mo did in Monaco last week, breaking my 28-year British record in the 1500m, was astounding and has sent shockwaves around the world.

He didn't win that race but gained more headlines than the winner, Kenya's Asbel Kiprop, because no Briton has run that quickly before.

Afterwards, everyone wanted a picture of the two of us together during dinner and we had a good natter. He was up quite late that night chatting.

Mo has developed his speed, pushed on from last year, and says he is in better shape than 12 months ago when he won double Olympic gold.

At seven minutes 20 seconds, the world record for the 3,000m is one of the crazy records. Mo could run that time in a big race, but I'm not 100% sure it's on his radar this weekend.

David Moorcroft's long-standing British record of 7:32.79, though, should be straightforward for him, if that's what he wants to do.

Mo's training has been going well during the last five weeks, and I know he's been particularly pleased with one or two of the sessions. And if they didn't know it already, the Kenyans and Ethiopians are going to have a tough job to beat him in the World Championships next month.

Mo doesn't consider himself a 1500m runner - although maybe he should - but he's in a unique position now. He's run three minutes 28 seconds in the 1500m and who knows what he'll achieve in the marathon next April? No-one has covered that sort of range before.

He always had a good finish, but over the last three or four years he has worked on his technique, which isn't something distance runners normally do, and he's a better runner for it.

Mo spends a lot of time in the gym working on his strength, and it is the power he has gained which has helped his speed. Add the endurance he already had to the improved technique and strength and it all augurs well.

Ennis-Hill must only compete in good shape

Unfortunately, Jessica Ennis-Hill's build-up to the World Championships in Russia hasn't gone as smoothly as Mo's.

It is always a concern when you've had a long lay-off but she will be delighted to have set a new personal best in the javelin on her return from injury.

Jess intends to compete over the weekend in the long jump and 100m hurdles and these are big events for her. Her speed is key.

What we don't want is for Jess to go to Moscow and get beaten. It's important that Jess goes there in good shape, and ready to compete well, because she's still got a big career in front of her.

We want her to continue to win medals and, who knows, still be around for the World Championships in London in 2017. Right now, it's more important that she keeps herself healthy rather than competes in London this weekend, or in Moscow.

It is a year on from London 2012 and what a shop window it was for athletics. It was unbelievable and we're still reaping the benefits.

To have Usain Bolt and David Rudisha competing at the Olympic Stadium was great but, from a British perspective, what Mo, Jess and Greg Rutherford did on Super Saturday catapulted our sport onto the back pages and into the magazines.

Their achievements gave the sport the sort of exposure it hasn't had for a long time and it was important for athletics, especially for the commercial aspect, that the Olympics was the success it was.

The impact London 2012 had on our sport was phenomenal and one which hasn't just been felt in Britain. On the Diamond League circuit there's been a notable increase in interest from media around the world.

Usain Bolt is probably one of the biggest stars on the planet, but Mo and Jess are becoming world stars and people are interested in them.

Maybe people in South Africa didn't know much about Mo Farah before the Games but they certainly did afterwards and they remain interested. There's definitely been an uplift in the amount of interest in athletics internationally.

Young athletes must be educated over drugs

We talk about the Olympic legacy, and part of the legacy is to ensure kids are coming into our sport for the right reasons and pursue their careers in the right way.

Athletics must be seen to be robust when it comes to tackling drugs.

It's more complicated than staying clean. With supplements, it's pointless saying 'I didn't know about it'. You can do that when you're running for your local club - but not when you're an international athlete.

I admit, it's more difficult now than it was 30 years ago because there are more things on offer.

It was perhaps more cut and dried because people taking drugs in those days were usually taking steroids, whereas there are more grey areas now and people have to be aware of - and understand - their responsibilities.

I don't understand why that message hasn't got through. Yes, we rely on science and medicine to give our top athletes the edge, but it has to be done within the rules.

We've got to continue to push this environment where taking drugs, whether it's taking supplements or more cynical abuse, is wrong and we've got to be strong.