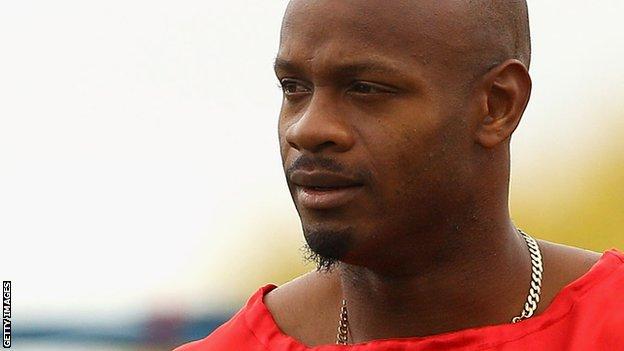 Former 100m world record holder Asafa Powell says he wants to return to the track as soon as possible after his failed drug test.

The 30-year-old tested positive for banned stimulant oxilofrine at the Jamaican Championships in June.

When the news emerged, he said he had never "knowingly or wilfully taken any supplements that break any rules" and has reiterated that stance.

"This has been the most difficult week of my athletic career," said Powell.

"The supplements I took formed part of a very strict and rigid training regimen," he added in a statement.

Powell and American sprinter Tyson Gay's failed drug tests were made public 10 days ago and both are now awaiting the results of their B samples.

Powell said checks done by his team "told us the supplements were fit for consumption by professional athletes".

"I have retained legal counsel and as such I cannot now discuss all the details of the case," he added.

"I will say, however, that I have requested that my B sample be tested and I await the results.

"Should this sample return adverse results, my team and I hope that the hearings will happen as fast as possible so as to allow me to return to my team, to once again represent my country, and to make my family, friends, and fans proud."

Powell was the last man to hold the individual 100m record before compatriot Usain Bolt broke it in 2008.

He later helped Jamaica win 4x100m relay gold at the 2008 Olympics in Beijing.

Discus thrower Allison Randall confirmed she had returned a positive test at last month's trials on 15 July, the same day police in Italy raided the hotel rooms of Powell and Simpson and took away unspecified drugs for analysis.

Jamaican world 200m champion Veronica Campbell-Brown tested positive for a banned diuretic in May, the same month Gay provided his positive sample in an out-of-competition test.