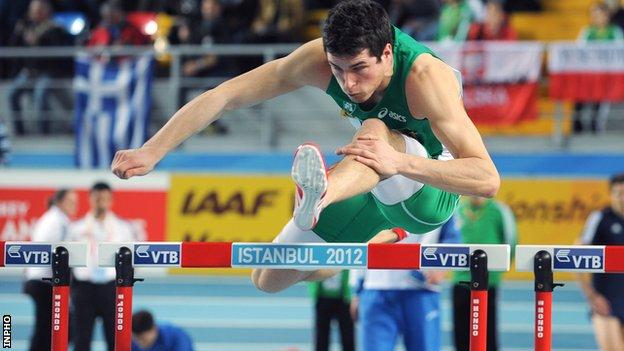 Holywood hurdler Ben Reynolds will miss next month's World Championships in Moscow because of injury.

Reynolds, 22, had been in line to represent Ireland in Russia after improving his 110m hurdles personal best to 13.49 last month.

However, the hurdler suffered a recurrence of an abdominal injury in training last week and will not race again this summer.

"It was a bit disappointing but I am remaining really positive," he said.

"I know there is a lot more to come from me in the future and I will now look at focusing on next year and the World Indoors in March and the Commonwealth Games.

"I could have gone to Moscow but with the possibility of three rounds, it would have been too much of a risk because of the injury.

"I am still very young and there is a lot more to come from me.

"I know I can run very, very fast and I am very positive about what the future holds.

"I know I am nowhere near my peak. I think I could have run two tenths or maybe seven three tenths faster this year because there is so much for me still to work on."

First up, Reynolds will miss this weekend's Irish Championships at Santry where his fellow northerner Jason Smyth will be another absentee.

Smyth had mulled over the idea of returning early from the IPC World Championships to compete at Santry after clinching his two gold medals in Lyon but he will now travel home with his Ireland team-mates on Sunday.

Derval O'Rourke will be another notable absentee after having to end her season because of an Achilles injury but several Moscow-bound athletes will be in action.

Letterkenny talent Mark English will move down in distance to run the 400m where he will take on holder Brian Murphy.

Brian Gregan is also moving down in distance to race Steven Colvert and schoolboy talent Marcus Lawler in the 200m while Roseanne Galligan will run the 400m after beating Sonia O'Sullivan 19-year-old Irish 800m record at the London Anniversary Games on Friday evening.

Despite Galligan's absence, the women's 800m could be one of the more intriguing events of the weekend with Laura Crowe taking on emerging Newry AC talent Aislinn Crossey.

The 17-year-old Newry runner improved her personal best by almost three seconds at last week's European Junior Championships where she clocked a remarkable 2:03.93 to finish fourth in the final.

Amy Foster will go into the women's 100m as favourite after equalling her personal best of 11.49 earlier in the summer but she may need to be at her best to hold off Bandon youngster Phil Healy.

The Cork girl clocked 11.63 as she finished a superb fourth at the European Juniors while Catherine McManus, Kelly Proper and former champion Ailis McSweeney will also be in the Santry field.

Thomas Barr and Jason Harvey will renew their domestic rivalry in the men's 400m hurdles with Barr hoping to perhaps duck under the World Championship B standard of 49.60.

Barr has improved his personal best to 49.78 this summer.

Letterkenny athletes Darren McBrearty and Daniel Mooney will be among Paul Robinson's challengers over 800m while Kerry Harty (3,000m steeplechase) and Eddie McGinley (10,000m) should be among the northern gold medallists.