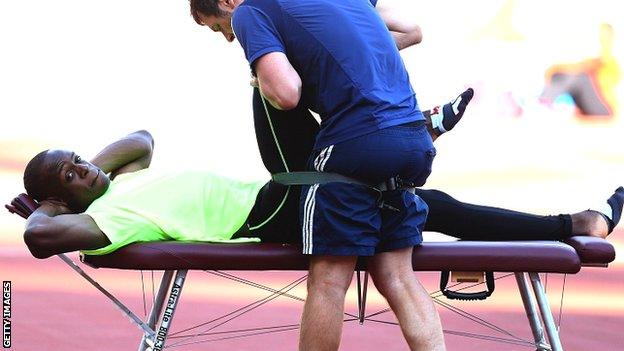 British sprinter James Dasaolu insists he will be fit for next month's World Championships, despite withdrawing from the Anniversary Games' 100m against Usain Bolt through injury.

The 25-year-old's 9.91 seconds at this month's British Championships is the second fastest time by a British man.

A tight hip flexor ruled him out of the event at London's Olympic Stadium but Dasaolu is focused on Russia, for the World Championships from 10-18 August.

Dasaolu, whose British Championships record time has only been bettered in British terms by Linford Christie in 1993, made it to the Olympic Stadium track for the Anniversary Games 100m, won convincingly by Olympic sprint champion Usain Bolt, but was injured during the warm-up.

"It is so disappointing I couldn't be a part of the show and I'm sorry for those who were looking forward to the race," he said.

"Everything was lined up for a great race but the tightness in my hip during warm-up couldn't be ignored.

"I am running fast this summer because I have made smart decisions with my coach (Steve Fudge) over the last 18 months and we're not going to change that approach with the World Championships just two weeks away."