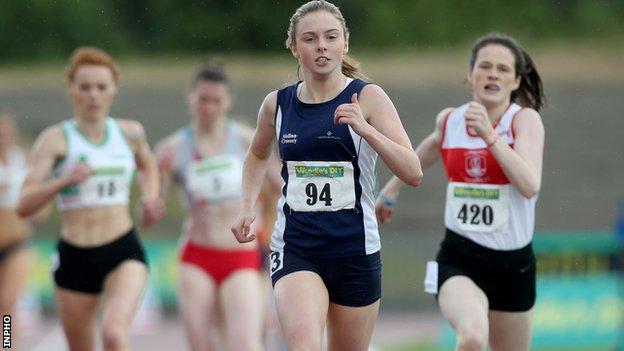 A week after her surprise fourth at the European Junior Championships, the 17-year-old secured victory in the 800m.

Crossey, who benefited from the absence of Roseanne Galligan and Laura Crowe, ran 2:07.49 with Alanna Lally second.

She cut three seconds off her previous best at the European Juniors as she clocked 2:03.9 in the final.

After his 800m heroics in London on Friday night, Mark English had to settle for a silver at Santry but it was a thoroughly satisfactory performance from the Letterkenny man who had moved down in distance to tackle the 400m.

Using the shorter event as speed work before his upcoming challenge at the World Championships, the 20-year-old cut .29secs off his previous 400m best as he clocked 47.27 to finish narrowly behind Brian Murphy (47.14).

Jason Harvey improved his personal best by .13secs as he produced a time of 50.13 in an exciting 400m hurdles final but once again his big domestic rival Thomas Barr broke 50 seconds as he took victory in 49.78.

With English otherwise engaged, Kildare runner Paul Robinson took his expected victory in the 800m in 1:48.92 ahead of Ferrybank's Niall Tuohy (1:50.53) and Letterkenny athlete Darren McBrearty (1:50.83).

Holder Amy Foster's absence from the championships allowed Kelly Proper to take her fourth gold of the weekend as the Waterford woman won the 100m in 11.78 with Ailis McSweeney (11.88) in second.

The 1500m titles went to Eoin Everard and Laura Crowe.

Conor McCullough threw over 70m three times in the hammer competition with 70.75m his winning distance while Maria McCambridge warmed up for her marathon challenge at the World Championships by winning the 5000m in 15:55.44.

Walker Brendan Boyce was another Letterkenny medallist as he improved his 10K personal best by 14 seconds to take gold in 42:40.19