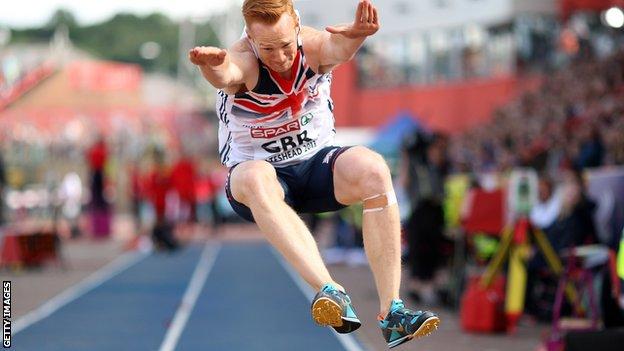 Olympic champion Greg Rutherford has passed a fitness test and been selected for the World Championships in Moscow, which start on 10 August.

Fellow Briton Chris Tomlinson does not have the 'A' qualifying standard.

The team will be captained by Christine Ohuruogu, who won gold in the 400m at the 2007 World Championships in Osaka.

Ohuruogu, Olympic champion in 2008 and a silver medallist at London 2012, heads to Moscow in confident mood after winning the women's 400m at the Anniversary Games at the Olympic Stadium in London on Saturday in 50.00 seconds, her fastest time outside a major championship.

The 29-year-old says selection for the role by UK Athletics performance director Neil Black came as a shock.

"When he called me up the other week, I thought I was in trouble!" Ohuruogu said.

"I am not normally someone who likes the spotlight, but this is a lovely feeling to be trusted in this role, and it's nice for myself and my coach Lloyd [Cowan] for the hard work we have put in over the years."

When he called me up the other week, I thought I was in trouble!

Black believes Rutherford, meanwhile, has shown enough in fitness tests to justify inclusion in the squad.

"Greg has shown a remarkable level of recovery," Black said.

"Following the fitness tests and his record of being able to produce a quality performance off minimal build-up, I am pleased to confirm his place in the GB & NI team.

"He'll continue to work closely with the support staff to maximise every additional moment in between now and 14 August."

Rutherford and Tomlinson jointly hold the British record of 8.35m. But, because neither has achieved the 'A' standard of 8.25m this season, only one of the pair could be selected.

Rutherford, 26, has not been in action since pulling his right hamstring at the Diamond League meet in Paris on 6 July.

Tomlinson, 31, competed at the Olympic Stadium in London on Sunday but managed only 7.99m.

He still felt he had done enough to be selected, telling BBC Radio 5 live: "Naturally I am disappointed I'm not selected and I think anyone in the athletics world will realise my frustration, from the point of view that on current form and injury I was in a good position.

"I happened to just miss the medals in London and Greg seized the moment and won that gold medal and, as a result, they have decided to take him on that basis."

Regarding the fact he has not achieved the 'A' standard, Tomlinson added: "It is very difficult to achieve this year.

"Anyone who does achieve it has very real medal hopes."

Rutherford will be hoping to compete alongside Olympic gold-medal winning team-mates Mo Farah and Jessica Ennis-Hill in Moscow.

Ennis-Hill has fitness concerns, having struggled all year with an ankle problem. A decision is due to be made on Wednesday on whether she will compete in the heptathlon.