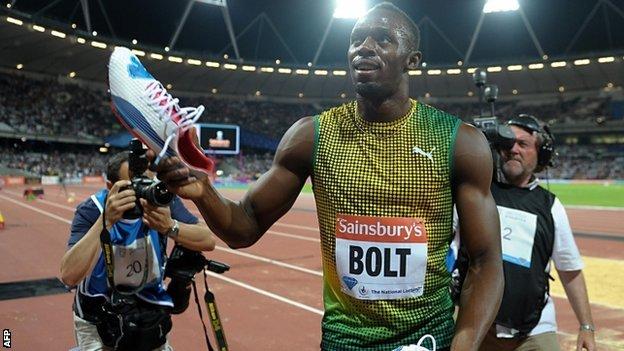 Usain Bolt says it is "very important" he regains the 100m title at the World Championships in Moscow, which start this weekend.

The 26-year-old won the title in Berlin in 2009 but was disqualified in Daegu in 2011 for a false start, allowing compatriot Yohan Blake to take gold.

"Of course it's very important [to win back the title]," said Bolt.

The Jamaican is overwhelming favourite to not only regain gold in the 100m, but also retain his 200m title - particularly with a number of his usual rivals not competing in Moscow.

Blake will not get an opportunity to defend his 100m title after he withdrew from the championships with a hamstring injury.

Former world champion Tyson Gay and Jamaica's ex-100m world record holder Asafa Powell both failed drug tests in July, and have opted to miss the event in the Russian capital.

And although Bolt was beaten by American Justin Gatlin in June at the Diamond League meeting in Rome, Bolt recorded the quickest 100m time this year - 9.85 seconds - at the Anniversary Games.

The six-time gold medallist has also posted of this year's fastest time in the 200m after running 19.73 seconds in Paris in July.

"I want to keep winning every race that I compete in and the 100m and 200m finals in Moscow will be the biggest races for me this year," added Bolt.

"My season has been good, I'm getting stronger every week and my execution and speed endurance is steadily improving."

The World Championships begin on 10 August, with the 100m final on 11 August and the 200m final taking place on 17 August.