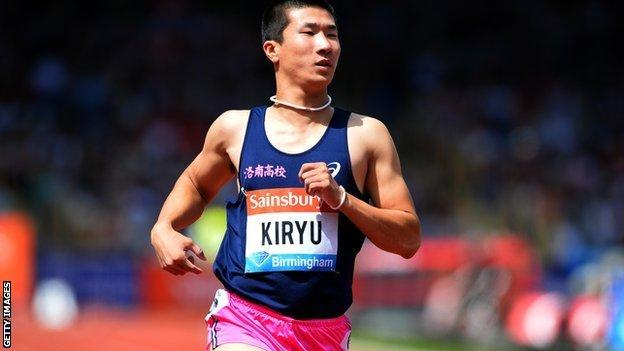 Yoshihide Kiryu did not look like the saviour of athletics' flagship event when he finished last in the 100m at Birmingham's Diamond League event in June.

In his first event outside his native Japan, the 17-year-old trailed home in 10.55 seconds, barely noticed by most of the crowd.

But unheard-of foreign schoolboys do not get to run alongside the world's best for experience.

He secured his invite because he is making headlines to rival a teenage Usain Bolt and is set to compete in the senior World Championships this weekend.

Back in April, Kiryu's run at the Oda Memorial event in Hiroshima caused the small crowd to gasp in astonishment.

Kiryu was only denied a share of Brown's record because the wrong sort of wind-measuring equipment was installed at the track.

"Technically he did not get a good start, so there are improvements to come there. Most of his best running was done between 30m and 80m. He is quite compact and has a high leg speed, but loses technique towards the latter end of the race as his body loses stability."

The Kyoto schoolboy had already broken the youth world record for younger athletes, with runs of 10.19 and 10.21 seconds in late 2012. With another four months until his 18th birthday, he has another season as a junior to beat Brown's mark.

But the aim for the rest of this one is to mix it with the world's leading men.

And Jamaican superstar Bolt has welcomed the arrival of Kiryu in the senior ranks.

"It's great to see athletes stepping up from all around the world. It shows that anything is possible," said the six-time Olympic champion, who did not run the 100m as a junior.

"They say a great athlete comes along every decade."

"It is a more difficult step mentally than physically," he told BBC Sport.

"When you stand on the line against established, experienced sprinters the little doubts go into your mind.

"You have gone from junior where you are winning every race to seniors, where you are fourth, fifth or, like Kiryu in Birmingham, last.

Japan may not have a distinguished record in the 100m, but it did host one of the greatest races in history. In the final of the 1991 World Championships, the first six men were all under 10 seconds and separated by a tenth of a second.

Legendary American Carl Lewis took gold in a then world record of 9.86 seconds. Great Britain's Linford Christie, who would win Olympic gold the following year, was fourth in 9.92.

"You are not getting the wins you once were to boost your confidence."

The slender margins involved, and the physical power and unshakeable self-confidence required to be the best, make projecting senior 100m success from youthful promise a risky business.

Brown, the man whose time Kiryu matched in Hiroshima, is yet to improve on the silver medal he won as a 19-year-old in the senior 2003 World Championships.

However, 2011 world champion Yohan Blake, double Olympic medallist Walter Dix and French national record-holder Christophe Lemaitre are some of the names among the junior stars who have gone on to greater things.

Reporter Kazushi Nagatsuka, who has covered Kiryu's career for the Japan Times, fears his compatriot could fall into the former camp.

"Japanese athletes are competitive against anyone in the world when they are younger," he told BBC Sport. "But as they get older, they falter and, in some sports, they can't even compete - mainly because of their size.

"Maybe they get worn down as well because they train so hard. They are often at schools like boot camps."

Certainly Kiryu is excelling in a discipline in which his country has not had much success.

His personal best of 10.01 was only one hundredth off Japan's national 100m record set by Koji Ito in 1998 and two hundredths off the Asian record set by Nigerian-born Qatari Samuel Francis in 2007.

If Kiryu does break the 10-second barrier in Moscow, he would be the first man of Asian origin to join the 90 athletes who have achieved the landmark to date.

The commercial possibilities for any success would be staggering in a sport that has slipped in profile in Japan since the early nineties.

"But every time Kiryu runs, his races are shown on television and covered in the papers. He is becoming a household name among ordinary people, not just athletics fans."

If his times keep falling, it might be that seeing Kiryu finish last becomes the one result that everyone who was at Birmingham's Alexander Stadium in June remembers seeing after all.