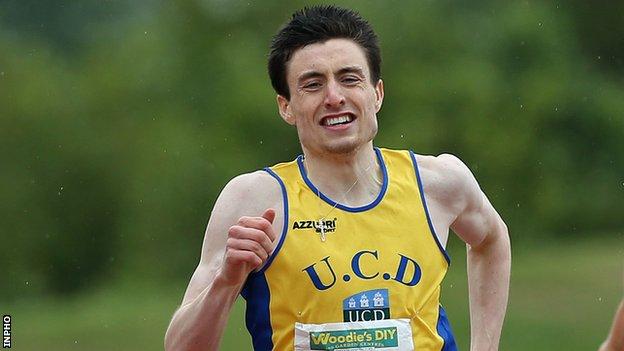 Letterkenny man Mark English will face a tough 800m heat as he is among the four Irish athletes in action on the opening day of the World Championships.

English and team-mate Paul Robinson compete in the 800m heats at 08:20 BST.

All three are faster on the clock that English's recently-set personal best of 1:44.84.

English produced that time when finishing an impressive sixth at the recent Diamond League meeting as he ducked under the 1:45 barrier for the first time.

Symmonds finished first in that race and his personal best of 1:42.95, set earlier this season, is almost two seconds faster than the Irishman's.

With only the first three securing guaranteed qualification for Sunday afternoon's semi-finals, English faces a tough task with Mutai having run his personal best of 1:44.59 this season and Balla clocking 1:44.31 in June.

But while it is a tough heat, English is capable of challenging for one of the three automatic spots or at least putting himself in contention for one of the six fastest loser berths if he can repeat his London form.

English goes in the fourth of the six first-round heats so he will have a sense of the kind of times that may be needed to claim a fastest loser spot.

His team-mate Robinson will not have that knowledge as he has been drawn in heat one.

Olympic gold medallist and world record holder David Rudisha is missing the Moscow championships because of injury but London silver medallist Botswana's Nigel Amos is in the 800m entry while other contenders include Ethiopia's Mohammad Aman, a winner of three Diamond League races this season.

The other Irish athletes in action on day one are women's marathon hopeful Maria McCambridge and 400m runner Jennifer Carey.

McCambridge will be looking to perhaps improve on her personal best of 2:35.28 in the marathon which starts at 11:00 although the expected hot conditions could be an issue for the Irish woman.

Kenyans Edna Kiplagat and Lucy Kabuu and Ethiopian's Tiki Gelena, who have all run under two hours and 20 minutes, are likely to be among the medal contenders.

American-born Carey (52.29) is the slowest of the contenders in her heat with defending world champion Amantle Montsho in the field.

Brian Gregan will be involved in the men's 400m heats at 08:05 on Sunday morning with Tori Pena competing in pole vault qualification during the afternoon session.

English and Robinson will hope to have progressed to the 800m semi-finals at 16:35 on Sunday with Carey unlikely to have survived to the women's 400m semi-finals 30 minutes later.