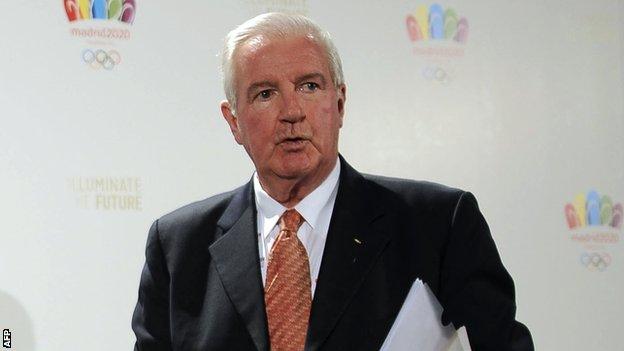 Sir Craig Reedie is set to be the next World Anti-Doping Agency (Wada) president after being nominated by the International Olympic Committee (IOC).

The 72-year-old Scot was put forward to succeed John Fahey, a former Australian minister, who will step down this winter after six years in the role.

For more on sport's doping problem, listen to The Report, which was originally broadcast on BBC Radio 4 on Thursday, 8 August at 20:00 BST

He will be the only candidate when Wada meets to vote in November.

If successful at the formal election in Johannesburg, Reedie will take over on 1 January.

Wada is an independent international organisation which leads the fight against the use of performance-enhancing drugs in sport.

The Olympic movement and governments co-fund Wada, and take it in turns to nominate the president. Fahey was the governments' nominee.

"It is daunting, if you look at the last eight weeks of news," Reedie said. "I have quite a lot of time now to sit and think and try to work out how we move forward."

The Stirling-born administrator played a key role in London's successful bid to host the 2012 Olympics, and retired as chairman of the British Olympic Association (BOA) in 2005. He has also held a number of other senior positions with Wada and the IOC.