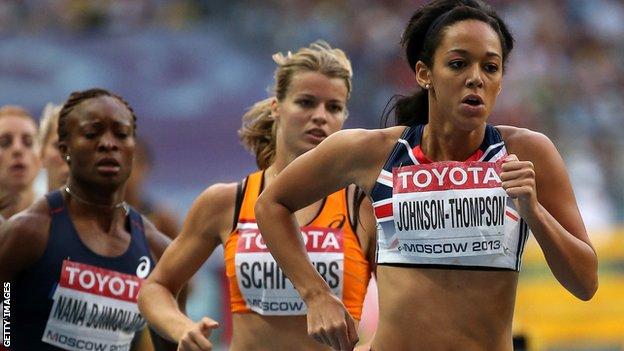 British heptathlete Katarina Johnson-Thompson missed out on a medal at the World Championships after finishing second in her 800m heat.

The 20-year-old needed to beat Schippers by three seconds but was less than a second ahead in the final event.

Olympic and World heptathlon medallist Kelly Sotherton: "Great pb by @JohnsonThompson under 2.08 [for the 800m]. Just missed a medal but wow what a 2 days. Tremendous efforts!"

"This was the first time in the 800m where I've been competitively running instead of going for a time and trying to get over 6400 points," said Thompson-Johnson of her final event.

"I'm a bit regretful I didn't say I could get a medal, because if I had a bit of belief in myself from the start I could have actually had one.

"It's weird to think I can target medals if I just sort out my throws.

"I'm also learning how to deal with these championships. Normally I'm used to open meets at Stoke."

Johnson-Thompson knew she had to beat Schippers, of the Netherlands, by around three seconds and France's Antoinette Nana Djimou by 2.2 seconds, and stay within half a second of Germany's Claudia Rath.

But Rath won the final 800m heat of the heptathlon more than a second clear of the British athlete to pip her to fourth spot by 13 points.

Schippers pulled off a late burst to deny Rath from taking bronze as Melnichenko finished less than a second behind Theisen-Eaton to ensure gold.

Despite the second-placed finish in the 800m, Johnson-Thompson's time of two minutes and 7.64 seconds was the fourth personal best she has set in this heptathlon event in Moscow.

Johnson-Thompson brought herself into contention for a medal with her first two events on Tuesday, recording career bests in both.

She finished second in the long jump with 6.56m, while her javelin throw of 40.86m was more than two metres further than her previous best.

It's always thrilling and this one had so much drama. It was a case of cat and mouse and Katarina Johnson-Thompson did a fantastic job and showed the class of Jessica Ennis. She knew what had to be done and put her all into it - you can't ask for more than a personal best.

The Liverpool-born athlete had already run a personal best in Monday's 200m with a time of 23.37 seconds.

She also clocked 13.49 seconds in the opening event, the 100m hurdles, just 0.01 outside her personal best, and followed it up with a clearance of 1.83m in the high jump, narrowly down on her season's best.

She managed just 11.52m in the shot put - one of her weakest disciplines - on the opening day but her displays on Tuesday ensured she achieved her aim of a top-eight finish and beat her previous best total of 6267, which she recorded at London 2012.

Toni Minichiello, coach of Jessica Ennis-Hill - who has not competed in Moscow because of injury - has told BBC Sport that Johnson-Thompson can be an even better heptathlete than the Olympic and former world champion.