London had Mo, Jess and Greg.

The middle Saturday of London 2012 was transformed into Super Saturday by the golden feats of three home athletes inside a full-to-bursting Olympic Stadium.

Now the Russians have their own moment to treasure - a Terrific Tuesday, courtesy of the greatest female pole vaulter of them all.

On a balmy evening in the Russian capital, Yelena Isinbayeva not only won a third world title to go with her two Olympic gold medals, she added much-needed spark to a sporting event that had hitherto failed to ignite.

The opening three days of these World Championships had the whiff of a county cricket match. Pockets of spectators were scattered haphazardly around a cavernous stadium.

Occasionally they would burst into applause and sometimes there were even cheers, the appearance of Usain Bolt proving the equivalent of a well-timed six into the grandstand. But, for the most part, they remained silent.

That all changed when Isinbayeva strolled into the Luzhniki Stadium, carrying not only a long pole but some X-factor and stardust.

"As soon as I walked through the door I could not believe the noise," said Britain's Eilish McColgan, who had been warned of the frenzied atmosphere that would await her as she took to the start line for the women's 3,000m final. "It was unbelievable. It wasn't London but it was close."

If the fastest man on the planet could not persuade the Muscovites to pack out the old Olympic Stadium - albeit organisers insisted there were over 40,000 spectators to see the Jamaican win the 100m - their poster girl, born 600 miles from the capital, at least ensured far fewer empty seats.

"They have come out in numbers to support their darling," explained former Olympic heptathlon champion Denise Lewis. "She lights up the stadium and is brilliant for the sport." 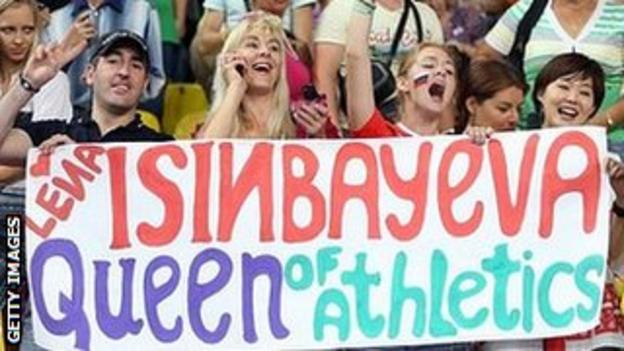 In a year in which 44 Russian athletes have been suspended for failing drugs tests, the story of the 31-year-old from Volgograd who defied age and form to win gold will ensure the sport is on the back and front pages of the nation's papers for all the right reasons.

Russian athletics needed Isinbayeva to roll back the years, to perform like the woman who at her zenith broke 28 world records to go with all those titles.

Could she do it? The form book said no. Four years ago, she set the current world record at 5.06m, but a 4.78m vault in Ostrava this year was the best she had managed since 2009. But 143 million Russians went with the heart rather than the head - they demanded the uplifting ending.

Isinbayeva took a break from the sport in 2010, constant training and competing being blamed for exhaustion. The only major title she had won since her return was the World Indoor Championships in Istanbul last year.

When she left London 2012 with a bronze, most observers assumed that a younger generation in the form of Cuba's Yarisley Silva and Jenn Suhr of the US - both five years her junior - had taken her mantle. Then she missed a large part of this season with a leg injury.

But her recent troubles had only made her more determined to succeed in front of her home crowd.

"I had a feeling that, yes, I had a chance and I wouldn't lose it," Isinbayeva told BBC Sport after seeing off the challenge of Olympic champion Suhr and London 2012 silver medallist Silva. 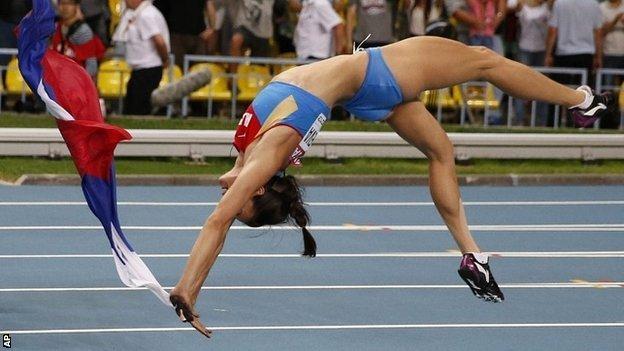 "This is more valuable because this gold wasn't given to me. I won this through hard work, through hard competitions," added Isinbayeva, who only took up the sport as a teenager because she was told that, at 5ft 8in, she was too tall to be a gymnast.

"I have had many difficulties in the past but I'm proud of myself because I've overcome these difficulties. I'm so happy about that."

There was no need for Isinbayeva to tell anyone she was happy of course; it was there for the world to see.

On learning that her 4.89m vault was good enough for gold, she sprinted into the stands, dodging a gaggle of photographers, to be embraced by the spectators.

Isinbayeva, though, knows how to work a crowd and, with the fans baying for more, she navigated her way back to the track to attempt a world record 5.07m.

The evening was not to end with a 29th world record for the Russian but she had already put on a show-stopping performance, and the spectators adored her for it.

She continued to entertain even once the main act was over. The temptation to jump into the arms of the championship mascot, a giant cuddly sparrow, proved impossible to resist.

And even when the vast majority of spectators had filtered out of the stadium, Isinbayeva remained on the track, posing for pictures with the national flag.

A short distance away, a sheet of A4 paper had been pinned near the door of the media conference with two words hastily scribbled on it: "Isinbayeva delayed."

Once she arrived, however, she was delighted to talk about her feat. By midnight, she still wasn't done. And, for the first time in these Championships, a sprinkling of fans, their faces painted in red, white and blue, patiently waited by the stadium gates for their heroine to emerge.

Isinbayeva will take a career break at some point to start a family before returning to the sport, reversing her earlier decision to retire at the end of the championships, rejuvenated perhaps by her return to the spotlight.

Or as she put it herself: "I'm the pole vault queen - the crown is mine."