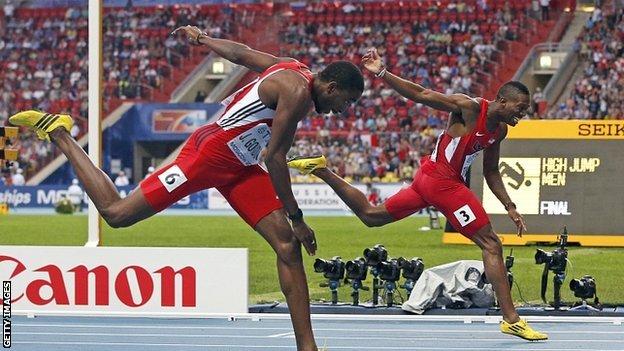 Gordon, 21, clocked 47.69 seconds, the fastest in the world this year, with Olympic silver medallist Tinsley taking silver with a personal best of 47.70.

Ukraine's Bohdan Bondarenko won the men's high jump with a leap of 2.41m.

Gordon hunted down the fast-starting Tinsley over the second 200m and won courtesy of a lunging finish. Serbia's Emir Bekric finished third in 48.05.

The flamboyant Kemboi, who clocked eight minutes and 6.01 seconds, pointed across to the 18-year-old Kipruto (8:06.37) as he crossed the line in a gesture of defiance. Frenchman Mahiedine Mekhissi-Benabbad (8:07.86) finished third.

Olympic bronze medallist Hejnova came on strong in the second half of the race to clock 52.83 seconds, the fastest time in the world this year.

American Allyson Felix got her campaign for a fourth 200m title and ninth World Championships gold under way with victory in her heat in a season's best time of 22.30 seconds.

Jamaica's Shelly-Ann Fraser-Pryce, who is bidding for a sprint double after regaining her 100m title, won her heat in 22.54.