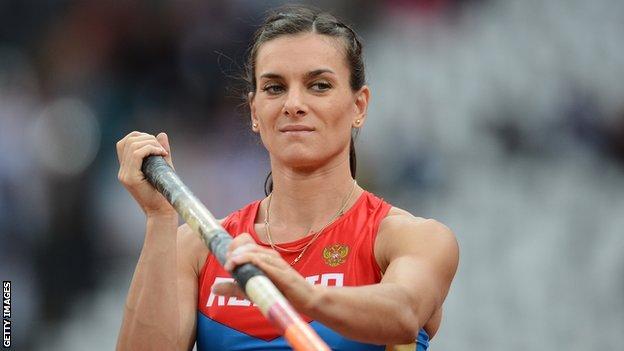 Russian athlete Yelena Isinbayeva says she may have been "misunderstood" over comments condemning homosexuality and insists she is against discrimination.

But in a statement on Friday, she said: "English is not my first language and I think I may have been misunderstood.

What I wanted to say was that people should respect the laws of other countries, particularly when they are guests

"I am opposed to any discrimination against gay people on the grounds of their sexuality."

A sporting icon in Russia who has set 28 world records, Isinbayeva was appointed in the role in 2010 by International Olympic Committee (IOC) president Jacques Rogge.

She added on Friday: "What I wanted to say was that people should respect the laws of other countries, particularly when they are guests," in a statement released via athletics' world governing body the IAAF.

Russia's president Vladimir Putin signed a law in June making it illegal to give under-18s information about homosexuality.

The move has been widely condemned and has led to calls for a boycott of the 2014 Winter Olympics in Sochi - where Isinbayeva will be the mayor of the main athletes' village.

In response, earlier this week, United States runner Nick Symmonds dedicated his world 800m silver medal to his gay and lesbian friends, while Swedish high jumper Emma Green-Tregaro painted her fingernails in the colours of the rainbow flag.

"Maybe we are different than European people and people from different lands. We have our law which everyone has to respect. When we go to different countries, we try to follow their rules.

We can only reiterate that the Olympic Games should be open to all, free of discrimination

"We are not trying to set our rules over there. We are just trying to be respectful.

"We consider ourselves, like normal, standard people, we just live boys with women, girls with boys. It comes from the history.

"I hope the problem won't ruin our Olympic Games in Sochi."

The IOC said in a statement: "Clearly English is not her mother tongue and she has now clarified that she was misunderstood and that she is 'opposed to any kind of discrimination against gay people'.

"We can only reiterate that the Olympic Games should be open to all, free of discrimination, and that applies to spectators, officials, media and of course athletes."

"I think Yelena is very genuine about this," he told the BBC. "I know Yelena very well myself, it is correct her English and her understanding of English is not the best and it's great that she sought to explain exactly what she meant.

"She is somebody who has a great heart, and if she has a lack of English language which we know of she certainly should be careful. When I saw them [Thursday's comments] I thought that doesn't respond to the character and what we know of Yelena."