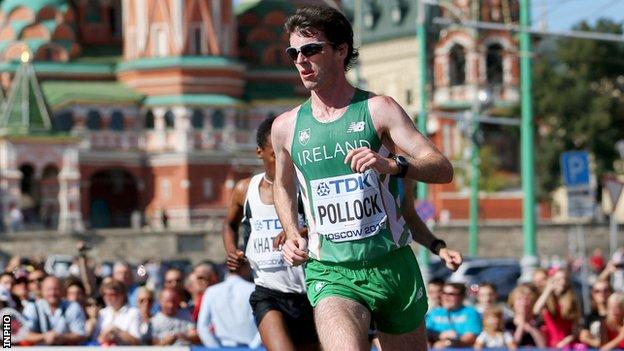 Holywood runner Paul Pollock justified his selection for the marathon at the World Championships as he finished in an impressive 21st place in Moscow.

Pollock's time of 2:16.42 left him as the second best European finisher in a race run in hot and humid conditions.

The Irish hopeful's time was 12 seconds outside his personal best but that represented a tremendous run on his debut at a major summer championship.

With major city marathons tending to be won nowadays in times below two hours and seven minutes, Pollock's run has to be regarded as the race of his life.

Pollock's ploy of starting steadily as opposed to his fast early pace at his previous marathons in Dublin and London proved to be a masterstroke.

The Northern Irishman was in 61st place at five kilometres and was still 60th after reaching 10K in 32.37.

However after reaching halfway in 67.59, Pollock had improved to 40th place as he arrived at the 25K mark in 1:20.35 and he continued to pick his way through the field during the remainder of the race.

The only European finisher ahead of Pollock was Spain's Javier Guerra who took 14th in 2:14.33 and the Irish team member was pleased with his performance.

"It was a very hard race, but I definitely think there's a lot more there," said the 26-year-old.

"Running in temperatures of 30 degrees can add a couple of minutes to your time.

"I was pouring water over myself all the way but I coped okay with the conditions.

"Myself and my coach thought we could be top 10 coming in but that was unrealistic looking now at all the Africans upfront.

"Twenty first and second European though, I have to be happy with that. It's a step in the right direction. "

Pollock recently began a break from his medical career and plans to concentrate on his running over the next two years.