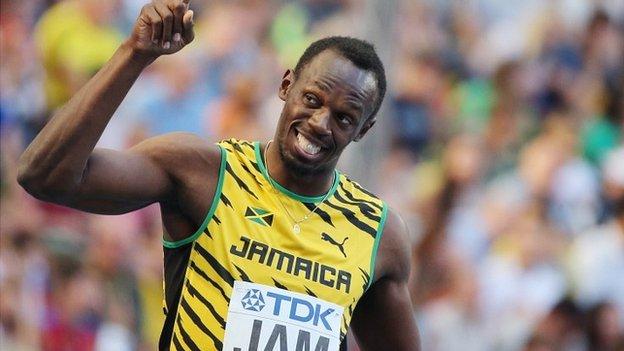 Usain Bolt guided Jamaica to victory in the sprint relay in Moscow to become the most successful athlete in the history of the World Championships.

Americans Carl Lewis and Allyson Felix also have 10 medals each - eight golds, one silver and one bronze.

Jamaica won in 37.36 seconds with the United States second and Canada third after Great Britain were disqualified.

Britain finished third but lost their bronze after an appeal was lodged against their second changeover.

However, the women's relay team were later promoted to the bronze-medal position after France were disqualified for a similar infringement.

The 100m and 200m world record holder also secured a sprint triple in World Championships for the second time, matching the trebles he completed at the 2008 and 2012 Olympics.

"It is just great," Bolt said of the comparison. "I'll continue dominating. I'll continue to work hard. For me, my aim is to continue into the greatness thing."

The United States team gave the Jamaicans a scare but Rakieem Salaam's handover to Justin Gatlin left the individual 100m runner-up off balance.

He clearly strayed into the Jamaicans' lane outside him but somehow escaped disqualification.

It made no difference to Bolt, who streaked clear to complete victory in the sixth-fastest time ever.

"I wasn't really worried about Justin. I knew if he got the baton in front of me, I could catch him," Bolt said. "So it was just going out there to run as fast as possible."

Bolt delighted the crowd with a celebratory Cossack dance before parading round the track with team-mates Nesta Carter, Kemar Bailey-Cole and Nickel Ashmeade.

Gatlin paid tribute to Bolt's success, saying: "To be able to rise to the occasion when an entire stadium full of people are either rooting for you or want to see you fail and you're able to hold it together, that takes talent.''

The British quartet also celebrated wildly after finishing third but James Ellington and Harry Aikines-Aryeetey failed to exchange the baton in time and the team were disqualified 30 minutes after the race.

Jamaica also won the women's 4x100m relay to give Shelly-Ann Fraser-Pryce her third gold medal of the competition.

Britain were second at the final changeover but Hayley Jones was overhauled by France and the United States and finished in fourth place.

However, Britain's protest was upheld two hours later and the team of Dina Asher Smith, Ashleigh Nelson, Annabelle Lewis and Jones could finally celebrate a medal, with the United States promoted to silver.

It meant Britain finished the championships with six medals in total, with golds going to Mo Farah (two) and Christine Ohuruogu and bronzes to hurdler Tiffany Porter and both women's relay teams.

In other finals, Teddy Tamgho jumped 18.04m - becoming only the third man to clear 18 metres - to take gold in a high-quality triple jump competition which ended with Olympic champion Christian Taylor in fourth.

Russia finished top of the medal table with seven golds while the United States won six, although the Americans secured 27 medals in total to the hosts' 17.