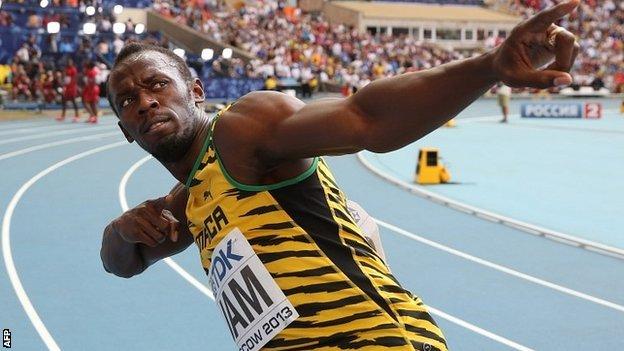 Usain Bolt will leave Moscow as the most decorated athlete in the 30-year history of the World Championships.

He won three golds in the Russian capital - in the 100m, 200m and sprint relay - to take his World Championship haul to 10, equalling the totals of Carl Lewis and Allyson Felix. The 26-year-old stands above both Americans because he has won two silvers to their silver and bronze respectively.

The Jamaican also drew level with Lewis, Felix and Michael Johnson's record of eight gold medals. Johnson, whose 200m world record Bolt broke four years ago in Berlin, talks to BBC Sport about the Jamaican's "other-wordly" talent and explains why Bolt is the greatest in history.

Usain Bolt is number one, there's no question about that. He's the best that's ever been.

I've never seen an athlete with the ability to dominate two different events without much effort.

I truly believe that if Bolt started training next year by just doing the same old workouts each day, just running a few 200m - not training hard, just doing enough to keep in shape, he'd still beat the others. That is how talented he is and it's amazing.

You can't compare Bolt with any other athlete. Mo Farah, for example, is talented but he's not got the other-worldly talent Bolt has. He's incredible and you can't compare him to any athlete that's ever been.

Bolt was not tested in Moscow

I wasn't impressed with the way he performed in these championships because he wasn't in good shape.

He's had injury problems and, in addition to that, a lot of the world's best sprinters, the ones we thought could have challenged him, weren't here.

It's not Bolt's fault Tyson Gay and Asafa Powell were suspended for failed drugs tests or that Yohan Blake was injured, but it's unfortunate for fans like myself that we didn't see him truly challenged.

Take nothing away from Bolt's achievements in Moscow, he could only beat who was here. But it was disappointing, although that is sport and there's nothing we can do about it.

It's too easy for Bolt to dominate

It would be difficult for most athletes to dominate for as long as Bolt has, but it isn't so much for him because he's so much better than everyone else.

Actually, it's easy for Bolt. He could even push himself more. I don't know whether he could break more world records at this point because he has health issues, but between 2008 and 2012 he certainly could have run quicker.

I think his performances at the Berlin World Championships in 2009, when he broke world records in the 100m and 200m, could end up being the best we've ever seen because he may not run faster than that in either event.

But he can win more gold medals. It's going to get harder and harder as he gets older, but he can certainly win more.

Bolt will compete at fewer events

The next few seasons will be interesting because other guys are starting to run faster, they know they have to run faster to be in contention to win medals and to keep up with Bolt.

But as Bolt gets older it will become more difficult for him to stay healthy and I suspect he will run fewer races.

If I were him I wouldn't compete as much, because he doesn't need to. He loves major championships, he loves preparing for championships, but I don't think running in Diamond League meetings really motivates him.

If you compare these championships to a lot of others which have been held following an Olympics, when the quality isn't usually quite so hot, I think Moscow has been a very good World Championships. 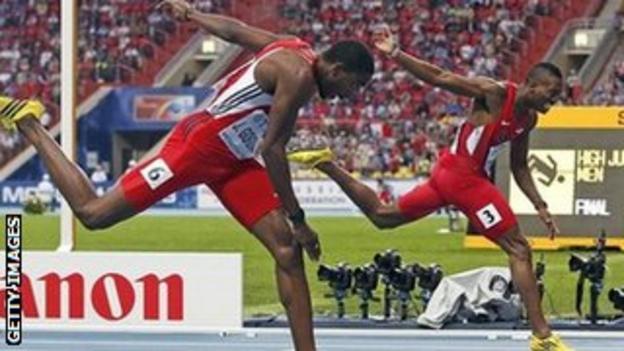 There were some great competitions, races which came down to the wire, and some great match-ups.

There were also races which people like myself, who are huge fans of the sport, didn't pick the winner and that's always exciting. Sometimes, we focus too much on trying to predict the winner instead of appreciating each athlete.

The event I enjoyed the most was the men's 400m hurdles. It was full of quality athletes and in Jehue Gordon and Michael Tinsley you had two men falling over the line, fighting to the wire, and that summed up what true competition is all about.