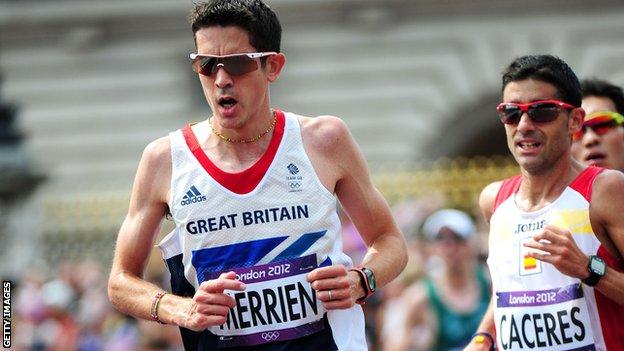 The Guernsey-based athlete has not run the distance since finishing in 30th place at last year's Olympic Games after chronic injury problems.

"My next marathon, all being well, will be the Commonwealths," the 34-year-old told BBC Guernsey.

I want to get back to full fitness over shorter distances

"I don't want to put my body through a marathon before then."

Merrien said the injury had been difficult to diagnose, which has made his recovery slower than he would have liked.

"I had an abductor problem connected with a problem where basically the bone wasn't repairing as quickly as it should do when you're training," said Merrien.

"We weren't sure what was causing it. I had a double hernia to try to stabilise my pelvis in March and I'm recovering from that.

"But, because it's been such a long time and essentially a chronic injury, it's taking a bit longer to heal and get back from."

Merrien said he was confident of getting back to his best as he gradually built up his training workload.

"I've had a bit of an up-and-down 12 months since the Games with injuries but I'm starting to get back running again now," said Merrien.

"I'm not completely out of the woods yet but it's definitely on the up in terms of the amount of training I'm doing.

"I'm still reasonably fit as I'm doing lots of cross training and gym work to get my body strong.

"I want to get back to full fitness over shorter distances but that's what I'd been planning to do post-Games anyhow."