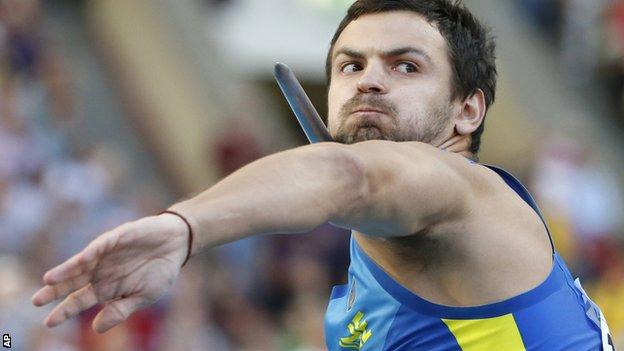 Roman Avramenko of Ukraine, who finished fifth in the men's javelin, was the only one of the group to reach a final at the event in Moscow.

The IAAF said that all seven have been sanctioned or provisionally suspended.

It had promised a stringent testing programme in Moscow after a recent series of high-profile doping cases.

Their doping positives were made public in July, a month after it was announced that Veronica Campbell-Brown, 200m champion at London 2012, had tested positive for a banned diuretic - something which is viewed as a masking agent by the World Anti-Doping Agency.

The 25-year-old Avramenko recorded a personal best throw of 84.48 in June before competing in Moscow, Vítezslav Vesely of the Czech Republic won the gold medal.

The IAAF said that in addition to taking urine tests from 538 athletes in Moscow, 1,919 blood samples were collected as part of its Athlete Biological Passport programme, designed to detect abnormalities in an athlete over time.

The president of the IAAF, Lamine Diack, said: "The specialised analyses and the blood samples taken in connection with the Athlete Biological Passport emphasise the IAAF's firm commitment and resolve to use the most sophisticated methods at our disposal in the fight against cheating in sport."