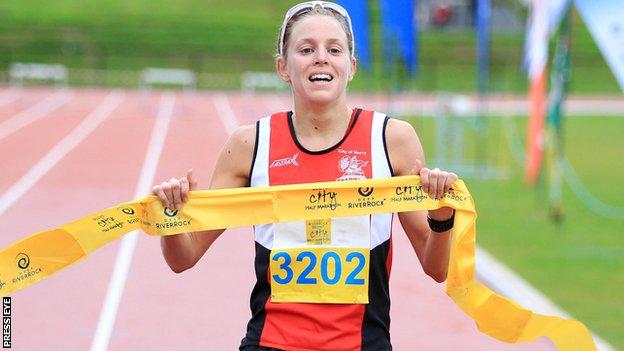 Stephen Scullion and Aileen Reid secured victories in Sunday's first running of the Belfast Half Marathon.

North Belfast runner Scullion won the men's race in 1:06.55, just under two minutes ahead of Eddie McGinley with Brendan Teer in third.

Derry triathlete Aileen Reid had over four minutes to spare on Julie Balmer as she won the women's race in 1:19.30, while Kelly Neely completed the podium.

Four thousand people took part the race, which started at the City Hall.

"This is fantastic - for this to be the first race, there's 4,000 runners and a lot of spectators, it's absolutely brilliant," said a delighted Scullion.

The 13-mile race was via Stranmillis and the Lagan Valley towpath finishing at the Mary Peters track.

She came in 24 seconds behind Britain's winner Non Stanford, whose victory clinched this year's world title for the Welsh triathlete.

Reid's runner-up finish in London moved her up to eighth overall in the world series.