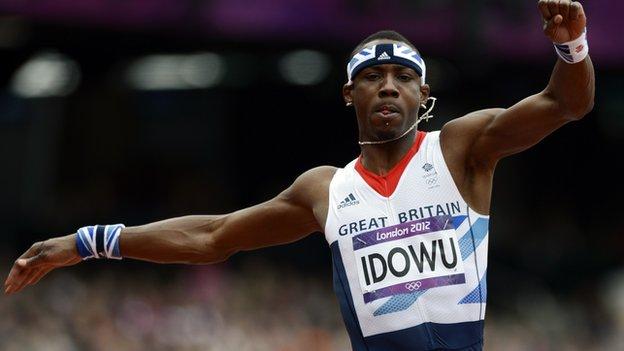 Former world champion Phillips Idowu is one of a number of high-profile GB athletes to lose their lottery funding for 2013-14.

Idowu, who won triple jump gold in 2009 in Berlin, took a break from the sport last year and missed the World Championships in Moscow.

Also among those to miss out are fellow former world medallists Andy Turner, Jenny Meadows and Lisa Dobriskey.

But the women's 4x100m relay team have been rewarded for their world bronze.

The sprint quartet of Ashleigh Nelson, Annabelle Lewis, Hayley Jones and Dina Lewis-Asher join the funding programme along with Anyika Onuora after the progress they made in the last 12 months following the failure to qualify a team for the 2012 Olympics.

On the Paralympic side, world champion Sophie Hahn, 16, gets funding for the first time after triumphing in the T38 100m at the IPC Athletics World Championships in Lyon in June.

Lyon silver medallist Jonathan Broom-Edwards (high jump) is funded for the first time while sprinter Sophie Kamlish is promoted from the potential squad and veteran Stephen Miller returns to the podium funding programme.

But London Paralympic wheelchair marathon silver medallist Shelly Woods misses out after her World Championships were hampered by illness and she will appeal the decision.

The 27-year-old from Blackpool tweeted: "Very disappointed to hear @BritAthletics have decided not to fund me on the @uk-sport world class performance programme. #nothappy."

UK Sport, the body which distributes the funding, has narrowed its criteria, meaning only athletes considered realistic medal contenders for the Rio 2016 Olympics are eligible for 'podium' funding. Previously the emphasis had been on the likelihood of making a final.

The result is a smaller crop of 22 athletes on top-level funding, plus 16 on relay funding.

The 44 younger athletes on the lower-level 'podium potential' support had to have proved their potential to win a medal in Tokyo in 2020.

In addition, there are 25 Paralympic athletes on podium funding, plus two on relay support, and 23 on podium potential.

"Our immediate focus is firmly on medals in 2016, followed by London 2017 when we will host both the IAAF and IPC World Athletics Championships," said British Athletics performance director Neil Black. "From there attention shifts to Tokyo 2020. Our selections absolutely reflect that focus.

"2013 was an excellent year for the British team across both the Olympic and Paralympic programmes. I'm confident 2014 will bring further success in what will be another extremely busy indoor and outdoor season."