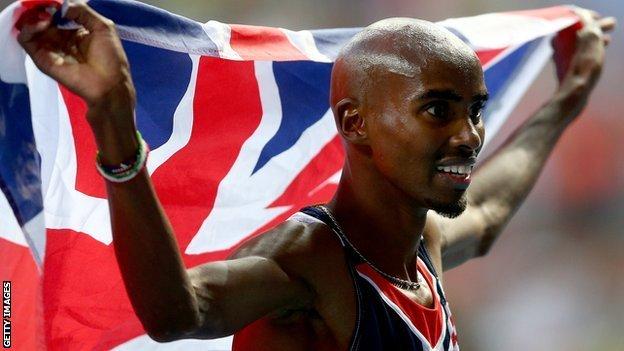 Double Olympic and World champion Mo Farah says he is yet to decide whether to compete in next summer's Commonwealth Games in Glasgow.

He said he would wait until after he runs in April's London Marathon.

"I've got to come off the marathon healthy and then I'd make a decision."

Meanwhile, Farah, who was born in Somalia but moved to Britain aged eight, also said he was "proud" to represent his country.

The debate over nationalism in sport was sparked last week, when England and Arsenal footballer Jack Wilshere said only English people should play for England.

"When I run for my country, it is the country where I've grown up in and where I have done everything," Farah said.

"I'm almost 31 and for the majority of my life I've been in the UK and gone to school here and learned everything, so for me it is completely different.

"You shouldn't be able to change because you could make more money by running for different countries."

You can listen to Victoria Derbyshire's full interview with Mo Farah on the BBC Radio 5 live website.