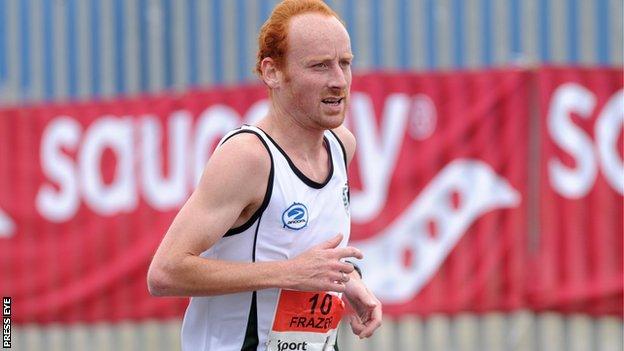 Thomas Frazer was the top Northern Ireland finisher at the Dublin Marathon in a race which had Irish winners in both the men's and women's races.

Dublin-based Hehir duelled with Joe Sweeney for much of the men's race before moving clear just after the 20-mile mark.

Sweeney held on for the runner-up spot a minute and seven seconds behind the winner with Clonliffe's Moldovan international Sergui Ciobanu producing another solid Dublin showing to take third in 2:22.04.

The Commonwealth Games-qualified Frazer was a further 30 seconds back in fourth with Annadale Striders pair Paddy Hamilton (2:23.37) and Eddie McGinley (2:24.52) fifth and eighth respectively.

The recently married McGinley, running his debut marathon, described his performance as a "solid outing" and he can look to taking significant chunks off his time in the coming years.

In the women's race, McCambridge had to battle hard before passing Cork athlete Claire McCarthy with two miles to go.

McCarthy, who had moved to the head of affairs at the 18-mile mark, was only 36 seconds behind McCambridge at the finish line as her time of 2:39.27 cut more than nine minutes off her previous best for the distance.

Financial constraints meant that this year's Dublin event was not able to attract elite performers from overseas.

But in spite of that, and the poor conditions, over 14,000 runners took part in the event.

One of the competitors collapsed during the event after suffering a suspected heart attack.

The man was treated by St John's Ambulance paramedics before being taken to hospital.