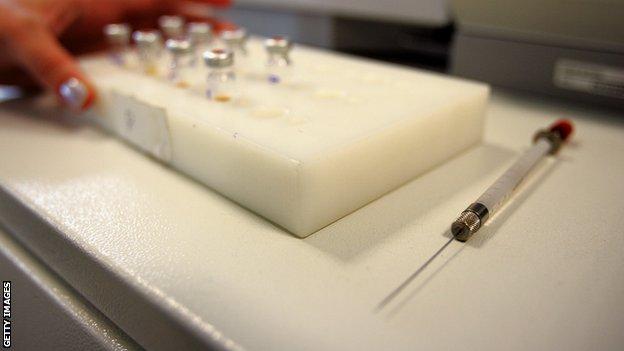 Kenya faces censure from the World Anti-Doping Agency (Wada) for failing to carry out a full inquiry into the alarming surge in the number of their athletes caught taking banned drugs.

Since January 2012, 17 Kenyan athletes have been suspended for using performance-enhancing drugs compared with only two between 2010 and 2012.

The issue is to be discussed at Wada's world conference on doping in sport in Johannesburg next month.

Although Wada has no powers to directly sanction Kenya's sports authorities it can rule that they are non-compliant with its code.

However, ultimately it is up to the International Olympic Committee to decide whether a nation's athletes should be banned from competing at future Olympic Games.

Compared to other countries we do not have a serious problem

That measure looks extremely unlikely at this stage, but Wada's director general David Howman is known to be frustrated and concerned at the lack of action in Kenya since the doping problem was first highlighted last autumn.

He is expected to name Kenya as one of the major problems facing the organisation in his report to the conference in South Africa.

According to Kenyan Athletics head Isaiah Kiplagat, Wada had given the Kenyan Olympic Committee (Nock) and the country's sports ministry a deadline of November to produce a report on their progress. Sources have told the BBC that with only two weeks to go to the Wada conference, no correspondence has been received.

It is also understood that a special committee set up by Kenya's sports bodies to look into the rash of positive tests has not met once since it was formed last year.

Rodney Swigelaar, director of Wada's Africa office, said: "We are very frustrated. It's more than a year now since we went there and even longer since the rumours started to spread.

"The procrastination has been frustrating. Officially I cannot say where they are at with their investigation.

"We have been extremely patient. Wherever these things happen, it's our role to go in there and ask what is wrong and why people are not complying with the code."

But Kiplagat told the BBC: "I can assure everyone that the government commission will start its work soon. We are hoping to start work before the Wada conference."

He added: "I don't think there is really a problem with drugs in Kenya. All our top athletes were tested before London and then again before the World Championships in Moscow this year.

"Compared to other countries we do not have a serious problem."

Despite Kiplagat's remarks, Wada could decide to set up an independent audit of Kenya - similar to the one being carried out in Jamaica this week.

A three-man team arrived on the Caribbean island on Monday to carry out an independent investigation into its anti-doping programme after serious concerns were raised about testing procedures in the run-up to London 2012.

But the situation in Kenya - a powerhouse of middle and long-distance running - is potentially much more significant.

The increase in bans has been accompanied by allegations of a widespread doping culture in Kenya.

Last October, a German TV investigation claimed that doctors in Kenya were supplying athletes with banned drugs in return for a percentage of their winnings from races.

Then in February this year, one of Kenya's greatest distance runners, Moses Kiptanui, said he believed the country had a major problem.

One of the biggest problems for Kenya has been the lack of a Wada-accredited blood testing laboratory in the country. The nearest facility is in South Africa, which means collecting, transporting and analysing blood samples is extremely difficult.

Earlier this year, the International Association of Athletics Federations (IAAF) sent in a special team to carry out blood tests on more than 40 athletes as part of their biological passport programme. The results were analysed locally but also sent to the Wada lab in Lausanne.

IAAF statistics for 2013 show that their anti-doping teams have carried out 725 tests on Kenyan athletes - 307 in competition and 418 out of competition - which represents a big increase in the scrutiny of the country's top runners.

But the IAAF wants to do more and had hoped to set up a permanent blood-testing facility in Eldoret in the Rift Valley where so many training camps are based. The BBC understands those plans have been scrapped and an alternative lab in neighbouring Ethiopia is now being considered.

Kenya's authorities say elections in March and the terrorist attack on the Westgate Shopping Centre in Nairobi have contributed to the delays in addressing the doping problem.