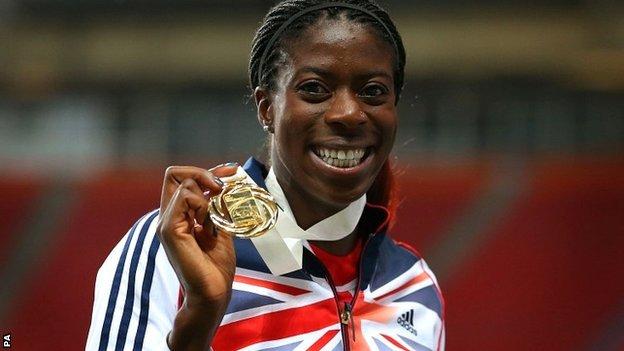 World 400m champion Christine Ohuruogu believes young women find sport a turn-off because it has to compete with an "inappropriate" celebrity lifestyle portrayed in the media.

She was speaking after the Culture, Media and Sport Committee started its women and sport inquiry.

The committee is trying to discover why more girls and women have not taken up sport after the London Olympics.

Ohuruogu said girls were "bombarded" with images of an "easier" lifestyle.

And the 29-year-old added it was no surprise that "very susceptible" young women chose that over the hard work associated with sport.

Ohuruogu told BBC Radio 5 live: "The best thing we can do is show them the benefits of doing sport - whether at elite level or recreational level where you are just trying to keep fit and stay healthy.

"That's what is troubling, that more needs to be done to work out why these girls are not accessing sport at a recreational level."

The 2008 Olympic champion added: "We wonder how come the Olympic Games, the biggest competition in the world, came to London and it's not gained much traction. [It is] because there are bigger and better images that are grabbing these young people's attention.

"It's not their fault, it's our fault - it's the media's fault, the TV, magazines, the setting out these images of what women should be like and how life is going to be. On the one hand we're saying go out and do sport and maybe hurt yourself, get injured, lose - I don't think it's them at fault, it's us doing them a disservice."

According to the Women's Sport and Fitness Foundation, 80% of women are not doing enough exercise to stay healthy.

It also says that only 5% of sports media coverage is devoted to women's sport and just 0.5% of commercial investment goes to women-only sport.

However, over 60% of sports fans say they would like to see more women's sport on the TV.

The Parliamentary committee heard from witnesses including triathlete Chrissie Wellington, with the first session focused on the main barriers that exist and the disadvantages women's sport faced compared with sport for men.

She said: "It's about this reality TV culture that we have, where you see girls who are perfectly dressed, perfect hair, perfect nails, they are shopping every day and leading a really cool lifestyle.

"I don't want to put everyone in the same box, but a lot of these young women aspire to this kind of lifestyle: get rich, get famous, do the bare minimum and life is great.

"On the other hand sport is saying work hard, be determined. When you see who won gold at London 2012 - the likes of Jessica Ennis-Hill, Victoria Pendleton - we have a whole host of women who have been working for a long time, for years, and it's not been easy. It's been hard work."

Tim Woodhouse, head of policy and external affairs at the Women's Sport and Fitness Foundation, told BBC Sport: "The problem starts really at school and we know that even at primary age, girls are already participating in sport less than boys.

"By the age of 14, only 12% of girls are active enough to benefit their health so we know that there's a real issue in school provision of sport, and that's one of the areas that we would like to see dramatic improvement in."